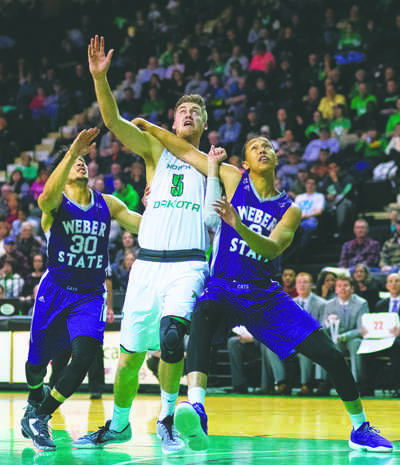 The UND men’s basketball team head into travel mode after coming off of a victorious three game homestand.

After Thursday’s matchup in Pocatello, Idaho the squad will head to Ogden, Utah to meet the biggest competition in the Big Sky: Weber State.

UND hopes to roll with the momentum after an impressive win over the Idaho Vandals 88-65. Contributions from the entire Hawks team worked in their favor for the over 20 point blow-out.

Quinton Hooker ended the week averaging 28 points per game and 4.5 rebounds per game, granting him the opportunity for his second Big Sky Player of The Week honor.

Sophomore Geno Crandall earned his sixth 20-plus scoring game in only the last nine played. Junior Carson Shanks handled 10 rebounds in the game against the Vandals breaking ground for new personnel records such as a career high of five blocks.

“Carson allowed the game to come to him,” head coach Brian Jones said. “To his credit, he hasn’t had a lot of size to play against the past few weeks. Sometimes, when you’re 7-feet and playing against 6’5” guys, it’s not easy to get into a rhythm because the minutes aren’t there for you due to matchup problems.”

Stumping the Wildcats is always a special feat, as they hold the top spot in the Big Sky Conference. The last time these two teams met earlier this season the Fighting Hawks were able to slide by with an 83-77 win.

“This team (UND) has put themselves in this position controlling their own destiny,” Jones said.

The team knew what they needed to accomplish this past week and with the help of the past three straight wins their position becomes a little clearer for what will be needed to finish the remainder of the season.

The Wildcats have been in the slumps as of recently, barely walking away with a win against Portland State in an OT final 96-93 and falling to Sacramento state 77-74. Sacramento State joins UND as the only other team in Big Sky to defeat Weber State this season.

“Sacramento State played terrific with urgency and a great edge, and we didn’t match their edge and toughness in the second half,” Weber State head coach Randy Rahe said. “We didn’t defend and rebound the way we need to on the road and we let our guard down a bit in the second half.”

Weber State has been the wall that UND hasn’t been able to break through in the Big Sky Championship in recent years, but starting this season against the Wildcats with a win could be the motivation that the Hawks need to get through this battle.

“If we defend the way we did this week we will give ourselves a chance to win on the road in the next three games,” Jones said.

The Hawks will head to Ogden, Utah Saturday Feb. 18 in hopes of taking over the top spot in the match against the Wildcats, tip off is scheduled for 8 p.m. CT.