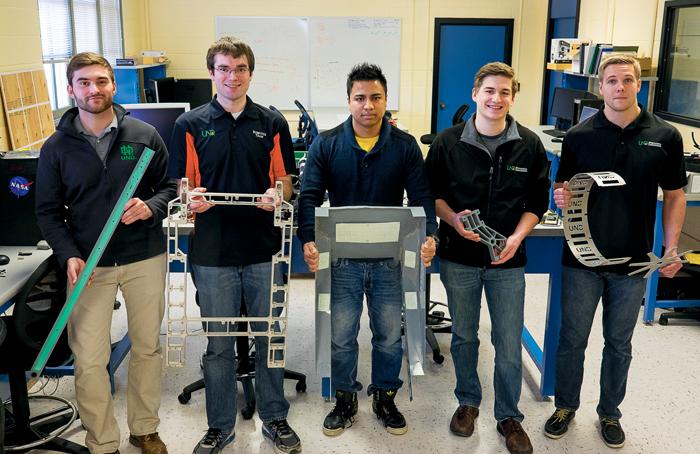 Members of the UND Robotics team stand holding components of their most recent robotic vehicle.

The University of North Dakota is competing to send a robot to the planet Mars.

UND is one of many schools around the United States participating in the National Aeronautics and Space Administration’s (NASA) 8th Annual Robotic Mining Competition. This competition, according to the NASA overview, is to build a compact robot capable of mining “ice simulant (gravel) and return the excavated mass for deposit into the collector bin to simulate an off-world, in situ resource mining mission.”

This robot is constrained by weight and size limitations, and will be controlled by remote control from a distant “mission control.” There are a total of 50 teams from colleges around the United States participating.

UND’s team is RAPTOR (Robot Automated for the Procurement and Transport Of Regolith) and is composed of mostly seniors from the mechanical engineering, electrical engineering and computer science departments. The team is made up of 12 students, including a graduate student and two online students, one from Saudi Arabia. The team is part of a capstone program for the engineering department, which is why many of the team members are seniors.

“Other senior design projects are major-related,” William Chesemore said, one of the senior teammates, “but [with] this being a multi-discipline project, it’s closer to the real life.”

Last year, UND won the Outreach Project Award through their interaction with the Grand Forks community, and came in 2nd place in the Slide Presentation and Demonstration Award.

The team’s robot must be ready by May 1, and the competition will be held on May 22, at the Kennedy Space Center Visitor Complex, in Cape Canaveral, Florida. As of now, RAPTOR’s robot is partially assembled, made of a lightweight magnesium alloy and features an ore hopper, conveyor belt and wheels with “UND” stenciled in the treads.

“It’s kinda cool to see something go from a couple of CAD (computer aided design) models to a tangible design,” Tristan Plante, a mechanical engineering major on the team, said.

RAPTOR is eagerly seeking new team members as well, with the deadline for team rosters being March 1.

“It’s really good to get into the project early on,” Plante said, “to get hands on experience like manufacturing.”

Alongside the experience gained from building and designing the robot, the group experience rewarding as well.