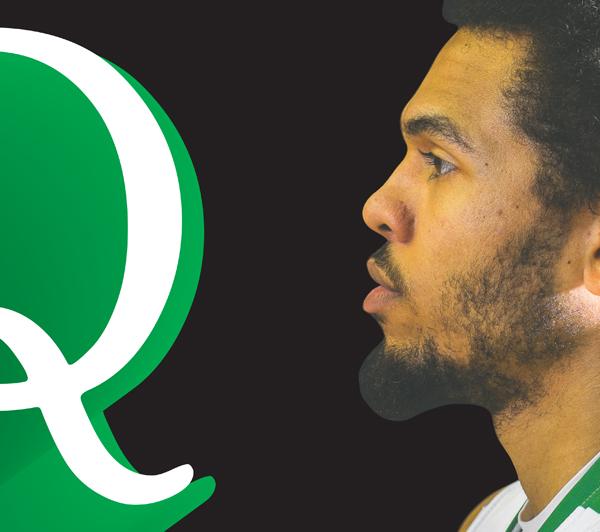 Making a name for yourself when you get to college is one thing, but what about putting meaning into a single letter? At UND, “Q” holds high value and major promise. It represents one of UND’s most well-known athletes who leads his team on and off the court to success.

A native of Brooklyn Park, Minn., Quinton Hooker has spent the last four years dominating up and down the court, setting records, snagging awards and most importantly staying humble.

“He’s the Pied Piper,” UND coach Brian Jones said. “People want to follow him because of his infectious personality. He’s an ambassador not only for the athletic department, but also for this university.”

Hooker has created a name for himself playing some of the best basketball UND has seen. He’s taken pride in being named a Lou Henson Mid-Major All-American and a finalist for Lou Henson Mid-Major Player of the Year Award, as well he was named the College Court Report Mid-Major Player of the Year, the latter was voted by the fans of college basketball and was one of Hookers favorite accomplishments.

“It’s amazing to see how much support I have from the people here and not even that but the people back home,” Hooker said. “People are still telling my parents ‘we voted for Quinton.’”

The contest was a bracket-style fan vote that started with 64 of the best players at that level of college basketball.

The basketball star hasn’t let the accolades get to his head, he works on his game continuously and takes pride in the men he has on the court with him.

“I have a lot of trust and belief in my guys and what we are capable of doing, they’re my brothers on and off the court and I know they have my back like I have theirs. It just shows how much of a family we are here at UND,” Hooker said.

The trust and faith runs deep in the basketball program, Hooker and fellow teammates make it a routine to attend a weekly FCA meeting on Monday evenings.

“I’ve been going religiously now for sure a year and a half,” Hooker said.

Getting involved as a student athlete is important to Hooker, and it’s something that he wishes he’d done right from the get go.

“Getting involved in things sooner like FCA or things like SAAC, the student athletic advisory committee,” Hooker said.  “Just more involved in the campus life is important.”

A common occurrence when you’re an athlete on campus is developing a quick clique with your teammates and it creates a difficulty to branch out. For Hooker FCA was a great way to branch out but his personality makes it easy gravitate towards.

“He’s a humble guy. The way he carries himself and the way he speaks makes you want to be around him,” UND sophomore women’s hockey forward Breanna Berndsen said. “I met him through FCA and I can hear and see how passionate he is about his family, friends and sports.”

The basketball team has the most support from the student athlete community with players from volleyball, football, men and women’s hockey and women’s basketball packing the stands at the Betty Engelstad Sioux Center to cheer on Hooker and his teammates.

While it’s important to make sure you’re getting involved in the community, Hooker also recalls the advice given to him by his senior teammates when he first walked onto campus.

“Time management as far as being a student athlete,” Hooker said. “Knowing the plan of when projects are due, when you have homework and tests and combining that with practice schedules and travel times and other activities off the court.”

Although now as a senior, Quinton still looks up to some of the same people such as Aaron Anderson who guided him when he needed it most.

“He got me into SAAC my freshman year and Aaron has a huge influence on myself and with other players on the team, especially with him still being around and helping us out,” Hooker said. “He was that guy that was on the poster, you always saw double A and how he handled everything and stayed on top of everything.”

As easy as time management is to preach, Hooker and Anderson have seen proof that it’s not as easy as it sounds.

“There was a time after the game where we had just gotten back to the hotel and he stayed up for three hours after we’d just traveled two hours to get back to our hotel after the game and he just said ‘I’m just trying to graduate,’” Hooker said.

It’s easy to forget that these high caliber players are also students, and they have the same tests and assignments due while also bringing pride to campus through their athletic successes.

So what are Quinton’s keys to success?

“Take care of the ball, following through with our defense and our game plan,” Hooker said. “We’re one of the top teams in the league right now, defensively and to hold onto that we really need to stay true to our principals and I think that’s something we lacked in the last game.”

Taking it one game at a time as Hooker heads into his last few games as a fighting Hawk thinking about the fierce competition.

“Each game in the Big Sky is huge, and it’s always a great challenge to beat Weber at their place. Handling them here was great especially back to back years,” Hooker said.

“Losing to them in the championship my freshman year and losing to them again last year,” Hooker said.  “They’re always that tip of the mountain that you have to fight through.”

So what’s in store for Hooker after graduation?

“It’s a little different for me because if I was a student I’d be going out to get a job but really after the season I’m definitely look to play professional,” Hooker said. “From that point I’m talking to Coach Jones and the staff and my family and seeing the options that I have, and hopefully I have a good option here to play in the NBA or go overseas and play.”

It’s going to be a crazy four or five months after the season ends because that’s when the real work begins.”

With an open mind and a bright future, he’s ready to take on the world’s successes. 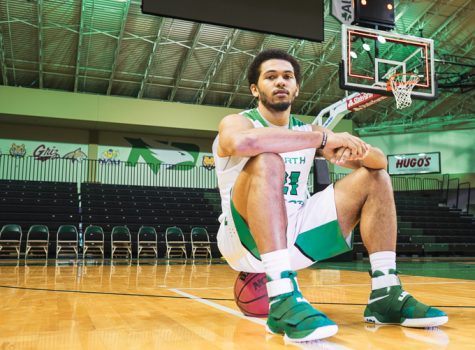