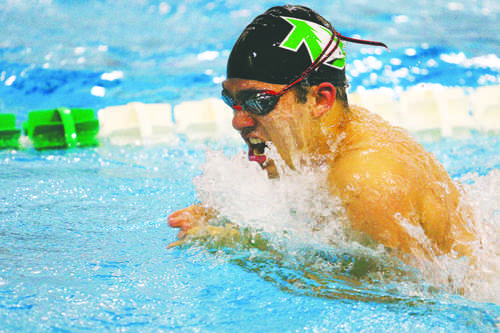 On Senior Day, the UND Fighting Hawks’ swimming and diving teams dominated the South Dakota State University Jackrabbits in their last home meet of the season with the men’s team winning 193-107 and women’s team winning 211-83.

On a day honoring the seniors, they did not disappoint. Noah Lucas, the only male senior, led the way for the UND men’s relay teams, as they won both the 4×50 medley relay (1:33.78) and 4×50 freestyle relay (1:25.29). In both races, Lucas crushed his opposition with freestyle heats over a second ahead of the other swimmers, giving his teams’ comfortable victories. He would also finish first in the 50 (20.15) and 100 freestyle races (46.87).

On the women’s side, senior Steph Frey swam her way to first place finishes in the 100 breaststroke (1:03.54) and 100 freestyle (51.54). In the 4×50 medley relay, after a fourth place start by Maddie Derby, Frey came in with a 27.88 second backstroke heat that was close to a full second and a half faster than the next best swimmer. This would give the UND relay team the lead and from there freshmen Katie Default and Emily Hamel would hold on for the win (1:45.67).

Sophomore Jacob Wielinski was another huge factor for the men’s team, winning all four of his events, including the 4×50 freestyle relay. Wielinski started the men off in individual events with a win in the 1000 freestyle (9:17.66), in which he finished a lap ahead of second place UND swimmer Luke Hutchinson. Wielinski also was champion in the 500 freestyle (4:33.34) and 200 butterfly (1:54.81)

Other than their success in diving, SDSU won only three total events in men’s and women’s swimming. Brothers Chris Rumrill and Wyatt Rumrill outswam competition in the 200 freestyle (1:43.47) and 200 breaststroke (2:07.32), respectively. Kristin Erf was the lone swimming victor on the women’s side in the 200 breaststroke (2:24.23).

This was the second time  the UND swimming and diving teams posted large victories over SDSU this year. On Jan. 15, the men’s team won 231-61 and women’s team won 222-73.

On a separate note, as part of recognizing the UND senior swimmers, their parents were welcomed to the pool deck to share a special moment with their senior, while being met with a loud round of applause. This year’s seniors include Lucas, Frey, Schwab, McKenzie Jeske and Nicole Stevens.

Next, the UND men’s and women’s swimming and diving teams head to the University of Minnesota for a Feb. 3-4 meet. This will be the last meet before conference championships, which take place Feb. 22-25 in Houston, Texas.