Hawks look to fly past Beavers 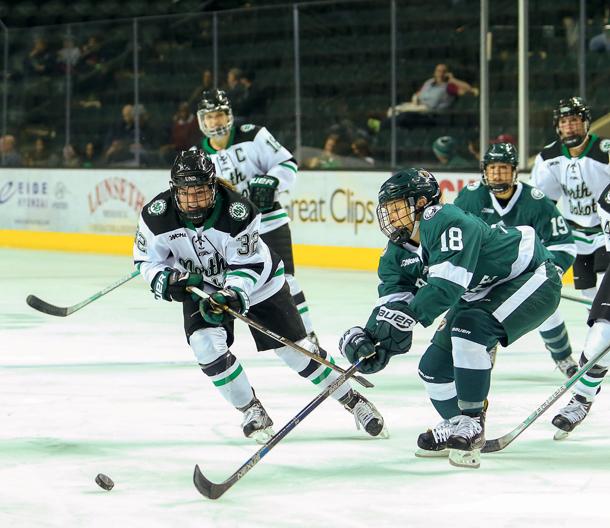 Hallie Theodosopoulos chases the puck as Bemidji State's Lisa Laiti attempts to block her earlier this season at the Ralph Engelstad Arena.

After a pair of heartbreaking losses to the No. 1 Wisconsin Badgers, the UND Fighting Hawks women’s hockey team looks to get back into the win column this weekend against the Bemidji State Beavers.

Losing two tightly contested games in Wisconsin dropped the Fighting Hawks to a record of 12-9-5 (9-7-4-2 WCHA), but UND has a case for optimism heading into this weekend’s showdown with the Beavers. The Hawks held the top-ranked Badgers offense to five goals in the series, including a season-low number of shots in a game and series.

“I liked our compete level. I thought we played well,” Head Coach Brian Idalski said. “That’s not an easy place to play with the crowd and the club. I thought for our younger kids to go into that kind of environment that we executed well and competed. Gave ourselves the opportunities to pull points out each night just didn’t get it done.”

The Hawks seek to carry that defensive intensity into a second home-and-home series against the Beavers, who look for revenge after being swept by their WCHA foe earlier in the season. The Hawks piled up five goals for a 5-2 win at home, including two by UND forward Amy Menke, and the next day shutout the Beavers in Bemidji, 2-0, behind 21 saves by UND goalie Lexie Shaw.

“Our game has improved so much in the last 10 years that there will be some growing pains, there will be some things that we need to iron out,” Idalski said. “I agree with coaches. We have a responsibility to hold ourselves and our teams accountable and I think that’s more than the compete level.”

Nevertheless, the Beavers, who hold a record of 9-13-2 (5-13-2-1 WCHA), have momentum, after winning in a shootout over the No. 2 Minnesota-Duluth Bulldogs last Saturday. The Beavers hope the shootout win boosts their season in the right direction.

“It’s huge, obviously. They just came off a big weekend against Minnesota so they’re obviously playing well and they’re playing with confidence and those are big points that we need,” said Beaver defenseman Carley Esse, who scored the winning goal in the shootout.

The Beavers, along with top scorer Emily Bergland (9-7-16), look to expose any cracks in a strong UND defense, while the Hawks seek to contain Bergland and the Beavers led by the duo of Gracen Hirschy and Halli Krzyzaniak who top UND defensemen in blocked shots (63) and +/- (+17), respectively.

“We definitely need to get the sweep again with these last games creeping up. It is really important to play our best games this season and I think we’ll be ready to go,” sophomore Charly Dahlquist said. “Getting people in front of the net is a huge thing, they love to block shots so pulling the puck over and trying to get those shots to the net and going 100 percent all of the time.”

The Beavers goalie likely will be Brittni Mowat, who has started twelve consecutive games. For the Hawks, Lexie Shaw is bound to be in net for game one with the possibility of Kristen Campbell taking the reigns in game two. After starting one of 21 games to start the year, Campbell has appeared in three of the last five, including two starts. Each appearance has occurred in the second game of a series.

“There’s a lot of travel this half, I want to try and keep Lexie healthy and sharp,” Idalski said. “So it was also an opportunity to get Campbell in the mix more than in the first half.”

This weekend’s series is crucial for the Hawks as they try to gain points in the WCHA standings. With road games with the No. 2 UMD Bulldogs and No. 4 Minnesota Golden Gophers coming up, points won’t be easy to come by, especially heading into the WCHA playoff in March. UND currently sits fourth in the standings with 33 points.

“It’ll be interesting because I know they probably feel a little bit like we did last week where that wasn’t necessarily their best foot forward early on in the year,” Idalski said. “They’ve grown a lot and watching film, they had a great weekend against Duluth, very competitive, so I think they’re probably eager to get back at us and prove a little bit how they’ve grown and improved as a club. That’s going to be a highly contested series with some big points on the line.”