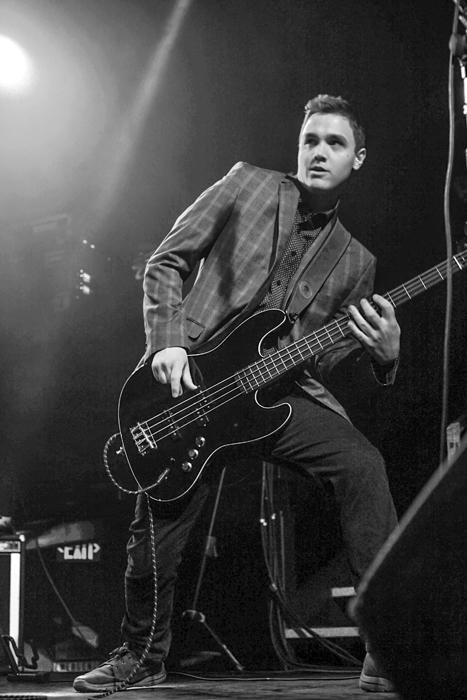 Cameron Campbell of Colin Campbell and the Shackletons performs at First Avenue in Minneapolis on January 18, 2017.

While he formulates his senior capstone, he also prepares for traveling every month for a gig with his band.

Junior high is when Cameron began his passion for music, playing with his friends at school.

In those days, he mostly played punk music. It wasn’t until Colin, his brother, began playing with them they turned to their now-blues traditions.

The blues-roots of the band are planted deeper within the family.

Their band became a stable group in 2013. The group would soon go under the band name Colin Campbell and the Shackletons.

“[Colin] went to all the [blues] jams and his name became a little big,” Cameron said. “In the blues, people were like, ‘Oh, that’s Colin’s band.’ So it was like, ‘we’re putting that name first.’”

The “Shackletons” part of the name shows the true, brotherly-fun personality of the band.

Ernest Shackleton was an Antarctic explorer. For one of his excursions, he rode a ship called Endurance. Ironically, the ship became trapped in ice. This left Shackleton to rely on his dogsled. During a blizzard, he was ultimately left no other option but to eat his dogs for survival.

“The curse that we’ve had is that whenever we have a big show in the winter, there’s always been a blizzard or something,” Cameron said. “There’s a bunch of pictures of us standing and there’s a whole bunch of snow coming down and we’re like, ‘you know what? Shackleton.’”

Cameron plays the bass and Colin actually does sing lead and take guitar; the third brother Evan is the drummer. Clay Knoll is considered the “honorary” member who fills in.

Only a year after the band had formed, they were using connections to get on the big stages.

In 2014, they played in front of thousands of people at the Thunder Bay Blues Festival. Cameron said the accolade is more memorable than the event itself.

“That was like the biggest letdown, because it gives you this idea that ‘oh dang, this is awesome’, because you’re playing in front of thousands of people,” Cameron said. “All of a sudden, you go back to playing to a half-empty bar.”

Over a few years, those half-empty bars would fill up into venues filled with adoring fans.

Just last weekend, the family band played at Minneapolis’ 1st Avenue for their Best New Bands of 2016 concert. It was sold out.

It was the childhood dream that became a reality. The only thing getting in the way, was the band’s ability to get to the stage.

“I tripped going up the stairs,” Cameron said. “It wasn’t good. I didn’t fall, but I stumbled a little bit. I was thinking, ‘I’ve been thinking about this for so long and that’s what I do!?!’”

Despite the initial stumble, the band went on to play a memorable show.

“Most of the people there know words to songs and are singing,” Cameron said. “That’s so much better than a thousand people who are just there staring at you.”

As their popularity grew, their music has been featured regularly on the MPR station 89.3 FM, The Current.

The station covers local Minnesota bands, enabling the group the reach out to other local bands as well as critics. One critic compared them to Coner Orberst and John Belushi.

The recent success of the band forced them to think about the big picture regarding where they go from here. A few years ago, it was a family band that played for fun. Now, Cameron has to travel back and forth to the Twin Cities every month for various gigs.

“After talking with my brother, [he said] this is what he wants to do,” Cameron said. “We’re not expecting to explode into anything. We would just like to tour around, fill up rooms and live off that.”

This is not a family simply trying to hide from “contemporary adult life”, this is a family with a passion for what they do.

Cameron is on the verge of getting a degree from UND, but his sights are on the future of the band.

“I worked in an office over the summer and I never wanna do that again,” Cameron said. “After this summer, especially after playing on the main stage, I was like, ‘this is what I want to do.’”

For now, Campbell is living the double life of a local rocker who attends college in Grand Forks.

“There’s this huge balance of trying to be okay with traveling on a train for six hours multiple times a month.”

This life is difficult, though he said it’s worth it.

Colin Campbell and the Shackletons have their music available on iTunes and Google Play. Their EP, “The Horizon Lines”, is available at https://colincampbellandtheshackletons.bandcamp.com/releases.