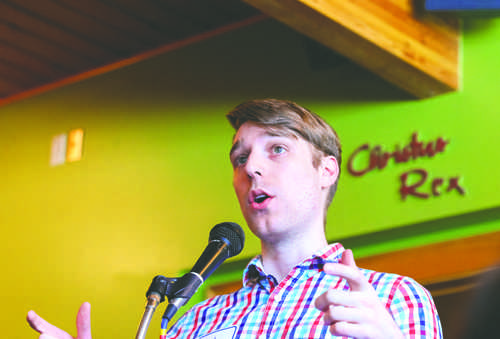 Archives hosted the informal group of women who gathered together to share their concerns and fears surrounding the presidency of Donald Trump, as well as possible ways to move toward a positive future for all.

The mission statement on the Women’s March on Washington website states, “We stand together in solidarity with our partners and children for the protection of our rights, our safety, our health, and our families – recognizing that our vibrant and diverse communities are the strength of our country.”

The event at Archives brought that vision statement home to the Grand Forks community. The organizers of the event gave attendees the chance to gather and connect over an important issue they are passionate about.

Attendees lifted their coffee cups to American ideals that are still attainable. Women were scheduled to share what they value most about the country, and what they intend to protect.

Senior Noel Lugo was part of the audience at Archives, and she spoke with The Dakota Student about her decision to attend the event.

Lugo spoke about the atmosphere of the event and how participants concerns were validated.

“It was so positive,” Lugo said. “It wasn’t a place to complain or to be angry.”

Women gathered to listen, to take action and to be active participants in democracy. The point of the event was not debate or complain, it was to speak honestly about concerns and fears audience members had about the nation’s future.

Lugo said this event was more about making an action plan for the future rather than a call to action. The Women’s March on Washington is largely focused on unity for all members of society.

The national event is committed to creating a society where black, native, poor, immigrant, disabled, Muslim, lesbian, queer and trans women are able to live free and healthy lives that aren’t impeded by an unequal society.

Speakers stressed the importance of taking action here and now. The Women’s March on Washington intends to be a first step toward unifying communities from the grassroots up. Taking action on a local level is starting point when it comes to social change.

The substantial turnout of the Raise Your Cups event showed how members of our community are committed to pursue unity amongst all members of society.

Lugo is enthusiastic about the future of the Raise Your Cups event.

“I’m really excited to see the energy at the Raise Your Cup event carry through over the next four years right here in the local Grand Forks community,” Lugo said.

The optimistic atmosphere at the Raise Your Cups event showed how our community is committed to a positive future for all.