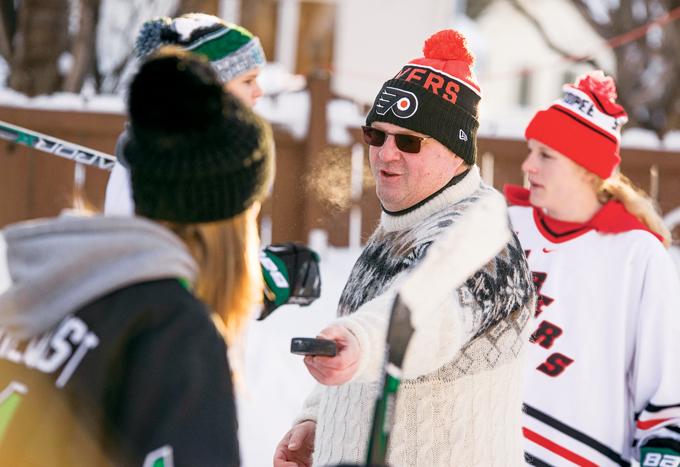 If you grew up in a winter climate like North Dakota, there’s a good chance you had an outdoor rink experience not the experience like the one provided at Peter’s Ice Palace.

Peter Elander, the associate head coach of the UND women’s hockey program, is trying to give children, students and even adults the best outdoor rink experience from the comforts of his backyard.

“I grew up in the south of Sweden when you could never do anything like a backyard rink, it’s not like Winnipeg or Grand Forks,” Elander said.  “So when I moved here seven years ago we made a little rink and you learn a lot when you make an backyard rink, like the details that are so important, patience is important, but it’s the best playground for kids to be in.”

What originally started as a rink just big enough for his children has grown over the years and consumed his entire yard. Now, Elander puts the size to good use and hosts an annual “Winter Classic.”

“When we had the rink we decided we should have a tournament, and it’s getting bigger every year,” Elander said.

This year marks the fourth year of Peter’s Ice Palace’s Winter Classic.  It has gone from a single tournament to  three tiers to accommodate everyone; children, student athletes from the women’s hockey program and adults.

“It’s for children my sons age, 12 or 13 year old. They play in a tournament  with a lot of tears and feelings, they want to win,” Elander said. “Then there’s the girls who want to skate and come out in this weather, they have their championship games for bragging rights and the adults is two on two, with heavy bragging rights on the line.”

During the women’s hockey tournament competition is intense with pride on the line, and there’s no shortage of trash talk.

“It was nice to get outside and enjoy the nice day with my teammates,” sophomore forward Charly Dahlquist said. “I’d say our team is pretty competitive so the trash talk was pretty entertaining.”

The tournament is also a great place for players to step out of their usual elements in a game as teammates get a chance to play against each other.

“Seeing everyone in different jerseys and competing against my teammates in a different setting than normal is my favorite part,” sophomore forward Rebekah Kolstad said.

The player’s showed up in all their best jersey’s representing all different types of hockey programs from NHL to high school hockey, split into four teams of blue, black, white and no jersey and the tournament headed into full swing.

The championship title and bragging rights was earned by the undefeated blue team and it didn’t take long for the gloating to begin.

“There was a lot of pride going into the Winter Classic, and coming out on top with an undefeated record was a pretty special feeling,” Blue team member Abbey Stanley said.

Separation in the tournament doesn’t stop the team-first mentality; the athletes still remember what they’re showing up for.

“Getting to play outside and having fun with my teammates out of practice is great,” sophomore defenseman Taylor Flaherty said. “More importantly, supporting Peter while raising money for charity.”

Elander also makes sure the event benefits his community by accepting donations for a charity each year.

This year donations from the Winter Classic were donated to Leukemia Lymphoma Society, but in previous years, donations have been made to other charities such as Doctors without Borders and the Canadian Cancer Society.

“We always try and find a charity, the first year we had the Canadian Cancer Society,” Elander said. “We had a player whose dad, Rick Kohler, who passed away, so we made some donations in his name. Last year was Doctors without Borders and this year is Leukemia Lymphoma Society.”

At the end of the day the children have fun, the women’s tournament was won by the blue team, funds were raised for a good cause and the adults had the chance to unwind on a holiday Monday for another Winter Classic at Peter’s Ice Palace.