Fighting Hawks looking for redemption on home ice against the Bulldogs 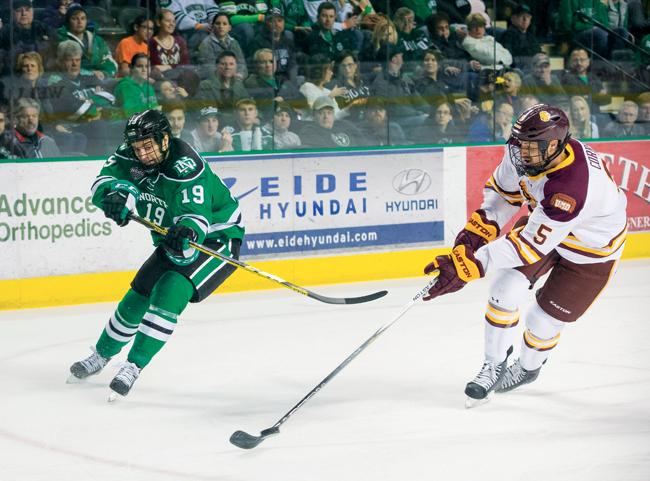 The University of North Dakota men’s hockey team will be out for revenge this weekend against longtime rival Minnesota Duluth.

After a split against Miami (Ohio), the Hawks will look to take advantage of home ice against the Bulldogs. The two have met earlier this season when the Bulldogs were able to get the sweep at home. The sweep was also the start of UND’s six game losing streak.

The Bulldogs have had a successful season so far. After last year left a sour taste in the mouths of many fans, the Dogs have provided elite level hockey throughout mid-January. They currently sit at a 13-5-4 record after splitting a series with St. Cloud State.

This won’t be the first time these two teams face off. The rivals have been in the same conference since 1966 when they were in the original WCHA. The Hawks and Dogs have battled a total of 233 times. UND has a huge edge over Duluth with a record of 144-80-90.

The record between the two teams recently show a very similar story. Stemming back to the 2012-2013 season, the Fighting Hawks still continue to own the Bulldogs with a 9-4-1 record. The matchup earlier this season was the first UMD sweep of UND since January of 1995.

Both teams dropped a spot in the national rankings, with UND going from 7th to 8th and Duluth going from 3rd to 4th. As for the NCHC standings, The Bulldogs remain at the top of the pile with 29 points. Denver is all that separates these two teams with the Hawks sitting in third with 20 points.

The two will look to move up in the rankings while the Fighting Hawks are out to prove the matchup earlier this year was a fluke.

Puck drop between the 8th ranked and 4th ranked teams in the country will be Friday at 7:37 p.m.

Jack Harvey is a staff writer for The Dakota Student. He can be reached at [email protected]