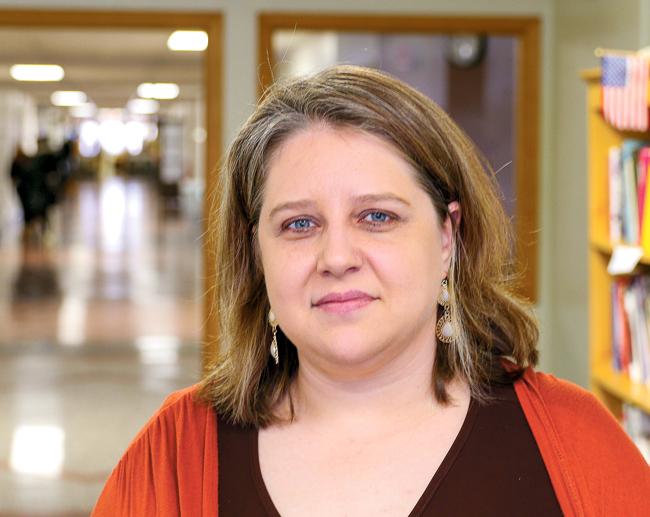 Sarah Cavanah is an assistant professor in the Communication department at UND with particular focus in community journalism and community information access.

Sarah Cavanah’s passion for journalism and its instrumental role in informing our society is evident in the excited way she talks about everything regarding her writing — from her humble beginnings in high school to her various fellowships, teaching  and professional experiences.

“To me, journalism is a professional practice that is devoted to providing fact-based information to people that will help them navigate their lives,” Cavanah said.

Growing up in a small Oklahoma town, Cavanah’s family of teachers nurtured her zeal for learning. It was her mother, who worked as a typesetter at the local newspaper, who inadvertently sparked her interest in journalism that has led to her long-standing education and career in journalism.

From a young age, Cavanah recalls going with her mother to work, and this early exposure to the industry led her to join the same weekly county newspaper as a reporter during her junior year of high school. When the editor for that newspaper left the job, as they often do to pursue other jobs in print, Cavanah accepted the position and began thinking of starting a career in journalism.

Along with getting an undergraduate degree in anthropology, and with her mom’s encouragement, Cavanah got a second degree in journalism and mass communications at the University of Oklahoma in 2001, she later got her masters from the same university and moved to the University of Minnesota for her Ph.D and graduated in 2016. Now, she returned to her small town roots to continue her path toward a full-time professor position at the University of North Dakota.

With its single local newspaper and fairly small population, Grand Forks is an ideal place for Cavanah to teach and research journalism and reporting in small communities. She began her position last semester as an assistant professor in the Communication Program at UND, which requires her to teach undergraduate classes while also conducting research. In six years, she hopes to become a full-time, tenured professor at UND.

Six years is a long commitment, but with her background and interests centered on news and information in small communities, Cavanah expressed excitement about spending her time in the North Dakota city.

“Grand Forks is a great college town devoted to learning and ideas,” Cavanah said. “People from all over the world are in a small city, and that causes them to learn more and think differently.”

Unlike larger metropolitan areas, Grand Forks is a smaller community whose journalism sources provide a slightly different purpose than those in the more populated areas. Cavanah explained.

“In small towns, journalism is not just about news, it’s about maintaining relationships,” Cavanah said.

While journalism sources in metro areas are often a site of conflict because differences in opinions are inevitable in large populations, journalism informs communities with more common interests in ways that are more centered on the wellbeing of the community as a whole.

Cavanah provided the example of a newspaper article reporting on the performance of kids in a local spelling bee. While some may call reporting about topics of this nature mundane or “not good journalism” as Cavanah explained, these are the kinds of stories people are interested in reading and act as the sort of “community maintenance” that fosters relationships among its members. These stories provide for refrigerator journalism, which refers to the types of stories that people find so engaging and relevant that they want to stick to their refrigerator.

These timeless aspects make small-town journalism vital to the community, and unlike its counterparts in metropolitan areas, it hasn’t seen a major decline in production and subscribers following the shift of journalism into the digital age. While some overlook this type of journalism, Cavanah sees it as an important part of the community and is looking forward to spending the next few years in Grand Forks being a part of it.

Stephanie Hollman is a staff writer for The Dakota Student. She can be reached at [email protected]