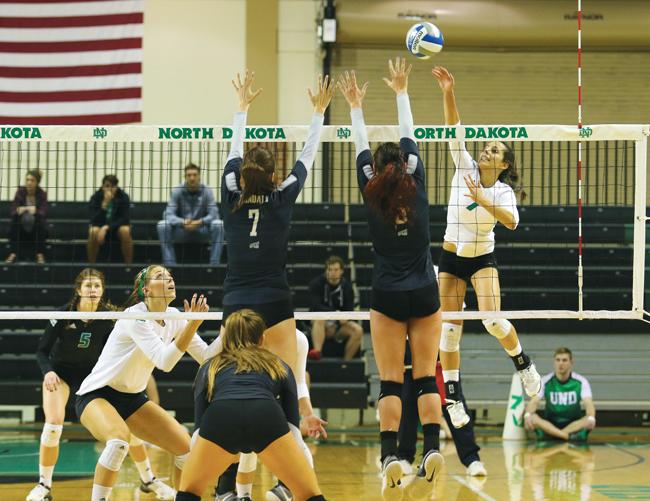 Tamara Merseli (right) spikes the ball against Idaho at the Betty Engelstad Center on Nov. 5.

North Dakota and Minnesota have a rivalry people in the area call “The Border Battle.” That “Border Battle” will be renewed this Friday night in the Twin Cities. The Sports Pavilion is home of the number one team in the nation for Volleyball, the Minnesota Golden Gophers.

The Gophers head into the NCAA Tournament as the number two overall seed and co-champions of one of the toughest conferences in the nation, the Big Ten. It’s safe to say it will be a very tough test for the Fighting Hawks in their first ever NCAA Division I Volleyball tournament.

UND currently sits at 26-9 overall. The Hawks will be looking to get revenge on the Gophers who already defeated the Hawks in September, also in the Sports Pavilion. That match went four sets, with the Hawks winning the second set 25-21. If that match says anything, it’s that the Gophers should be at least weary of the Hawks.

Hawks senior star Chelsea Moser was pleased when she saw the Hawks matched up with the Gophers on “Selection Sunday”.

“A lot of our girls grew up watching the Gophers and playing against their players in high school,” Moser said. “We’ll have more family and friends there than if we went somewhere else to play. And we had a fun time the last time we played them.”

The Hawks have been very good at the Betty Englestad Sioux Center. The Sports Pavilion is a good four and a half hours away from Grand Forks, but there might be a good chance that  Coach Pryor and his squad could have a decent contingent on Friday.

“We won’t have as many fans as the Gophers, but we’ll have a good contingent of fans,” Pryor said. “There’s some comfort level because we’ll have some fans and because we have played there before. The Gophers are vastly improved from our first meeting, as we are.”

The Gophers and Hawks will renew a rivalry this weekend in a win or go home match for both squads. The match is scheduled for 7 p.m. following the Hawaii-Southern California match.

Hawks fans will have to keep an eye on this weekend. The Volleyball team at 7 p.m. on Friday, the football team in a FCS playoff game at 5 p.m. in the Alerus, and the Men’s hockey team in Madison Square Garden against the Boston College Eagles.