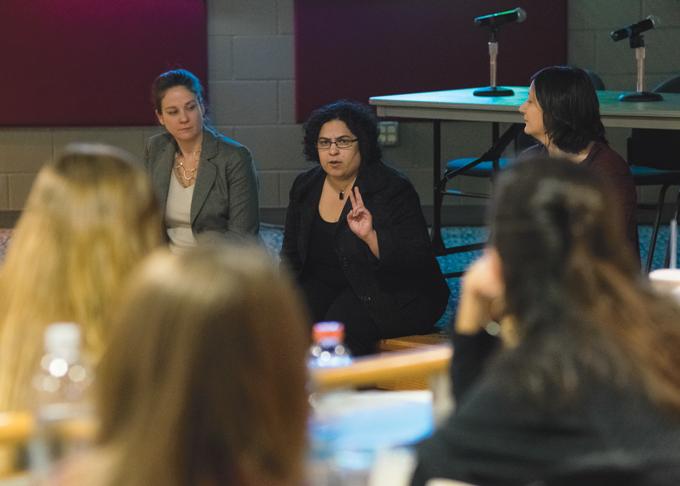 Sabrina Balgamwalla (center), assistant professor of law at UND, speaks during an immigration question and answer event Tuesday afternoon at the Loading Dock.

Various faculty members along with some students gathered together yesterday in the Loading Dock for a Q&A on Immigration Post-Election.

President-elect Donald Trump has voiced his intentions for dramatic immigration reform. Back in September, Trump told CNN about his platform on immigration.

“For those here illegally today who are seeking legal status, they will have one route and one route only.” Trump said. “To return home and apply for re-entry like everybody else under the rules of the new legal immigration system.”

Panelists were available to offer their insight on issues about immigration that may affect some of the students at the university. Throughout the hour long Q&A, the audience asked a wide variety of questions.

David Nguyen offered some insight on Deferred Action for Childhood Activists (DACA), since President-elect Trump has expressed has intentions to terminate the executive action signed into law by President Obama in 2012.

Termination of DACA could affect some students who are undocumented and currently supported by the DACA program. Nguyen said 750,000 people could be affected by the termination of DACA. He explained the history of DACA, since many members of the audience weren’t familiar with the executive action.

“One of President Obama’s campaign platforms during the 2008 election was to pass comprehensive immigration reform at the federal level,” Nguyen explained. “In 2012, into his second term, he figured out it was going to be difficult to do that. So he took executive action to basically correct prosecutorial discretion.”

DACA gives undocumented immigrants an exemption from deportation as well as a renewable two-year work permit which is issued by USCIS, United States Citizenship and Immigration Services, which is part of the Department of Homeland Security.

“All of this costs money,” Nguyen said. “USCIS is very dependent on application fees. Every time you have an international student, immigrant or family member that applies to USCIS, you’re paying hundreds of dollars each time you send in a little one page application.”

DACA helps children whose parents brought them into the country; they grow up being completed immersed in American culture with a desire of achieving the American dream—just like the rest of us.

However, it’s uncertain when President-elect Trump will take action on DACA according to Nguyen, so this leaves those 750,000 people uncertain about what’s to come in the future.

Nguyen offered his office as a safe space for students who had immigration concerned, and Bella Hettich said students who are learning English as a second language could come to ELS for assistance.

A member of the audience asked the panel where students, faculty or staff could find answers to specific questions or resources they need. Kit Johnson provided some insight on where people can go to find answers.

Johnson explained that the pursuit of a lawyer may be a good option for those questions, since there wasn’t necessarily a centralized place where people could get their questions answered.

Johnson suggested pursuing legal help if someone who is undocumented has a criminal history, because they could potentially face issues in the future. She said every possible contact with a police officer is a good reason to go see a lawyer for advisement.

A lawyer could offer advice and establish what immigration consequences, if any that could come as a result of a criminal conviction according to Sabrina Balgamwalla.

After the Q&A was finished, panelists stuck around to answer any additional questions or concerns people have.  The panelists explained that with time, more will be known about immigration post-election.