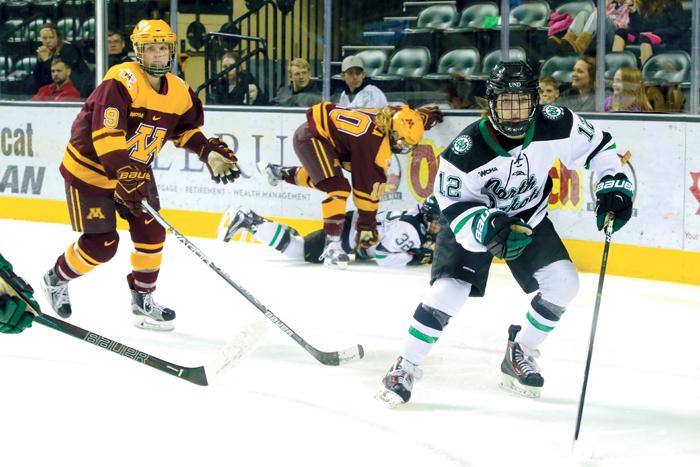 Ryleigh Houston chases the puck against the University of Minnesota Golden Gophers Saturday at the Ralph Engelstad Arena.

The women’s hockey team held the University of Minnesota Golden Gophers winless at Ralph Englestad Arena last weekend for only the second time in program history.

Both Friday and Saturday, the Fighting Hawks and Gophers ended their matchups in ties, 2-2.

Any time the Gophers  and the Hawks play, you know that you are in for a treat, no matter the sport.

This weekend was no different as the Gophers were able to claw back from early deficits in both games.

In the first game, the Hawks got off to a fast start scoring two goals early in the period.

“We knew we had to come at them fast right at the beginning, we had to be aggressive, and show them what we are made of,” Gracen Hirschy said. “I think we did that. I think we did pretty good for all three periods too.”

UND went on their first power play and made the Gophers pay. Hirschy found a loose puck in front of the net and buried it to take an early 1-0 lead.

Just two minutes later, Vilma Tanskanen redirected the puck into the net to extend the Hawks’ lead to 2-0.

The second period is when the Gophers were finally able to strike. Four minutes in, Dani Cameranesi scored making it 2-1.

Cameranesi struck again in the third to tie the game up at 2-2.

The Gophers had three power plays just in the third period, but they could not cash in on the opportunities and the scored ended in a tie, 2-2.

After a scoreless overtime, it would take a shootout to determine the winner.

In the shootout, each team failed to score in the first three rounds. Lee Stecklein gave Minnesota the shoot out victory in the fourth round.

“I thought we played well, come out and get a lead, and play with the lead for big chunks of the game,” Head Coach Brian Idalski said. “I really thought our effort and execution was good today.”

On Saturday, the score was the same as Friday.

UND opened scoring with a redirected goal by Emma Nuutinen off a shot from Jordan Hampton.

Two minutes later, on the first power play of the game, Minnesota got on the board with their first and only power play goal of the weekend.

Hallie Theodosopoulos took advantage of a turnover and found the net with a shot from the left circle to give the Hawks a 2-1 lead.

The lead would hold up until two and a half minutes into the third period. Sarah Potomak scored to tie it up at 2-2.

In overtime, the Hawks out-shot the Gophers 5-1, but could not send the UND faithful home with a win.

Unlike Friday night, the Hawks were able to get on the board in the shootout with a goal by Halli Krzyzaniak. Unfortunately, the Gophers scored two goals and won the shootout in three rounds 2-1.

The Hawks’ defense came up big this weekend as they not only held one of the best teams in the country to four goals and winless, but they also blocked 46 shots between the two games.

“I think we played really well, we were right there with them every game.” Theodosopoulos said.

The Hawks will be back in action at the Ralph next weekend as they host Syracuse. The games are Nov. 25 and 26 and the start time is 2:07 p.m. both days.

Adam Gunderman is a staff writer for Dakota Student. He can be reached at [email protected]