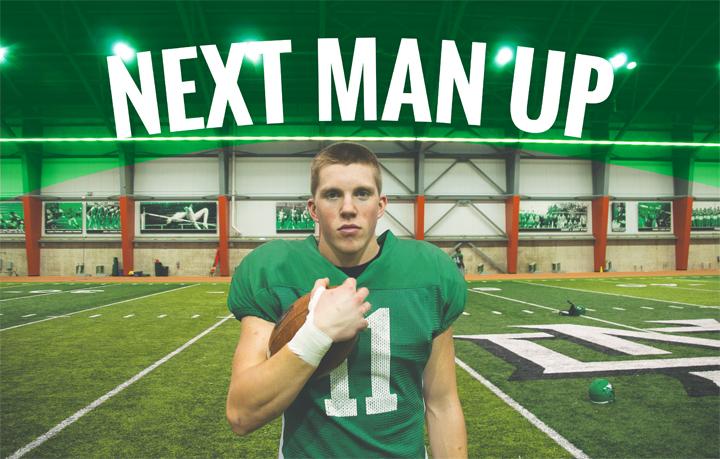 It’s the first game of the season. The Fighting Hawks are in Stony Brook, N.Y. taking on the Seawolves.

Senior Clive Georges was set for a big season after missing most of the 2015 campaign. Then, disaster struck. Georges needed to be carted off the field with an apparent serious injury, a huge blow to the UND receiving core.

For many freshmen, their first collegiate game is something they will never forget. It also can be a very nerve-wracking experience.

“I was really nervous, but it was a lot of fun,” Toivonen said. “Definitely a different atmosphere than high school.”

The Red Wing, Minn. native has not shown his nerves as he leads not only all freshmen receivers in yards, but leads the whole team.

After the dust settled from the 2016 regular season that saw UND clinch it’s first ever share of the Big Sky Conference championship, Toivonen had amassed 412 yards receiving on 38 receptions to go along with his three touchdowns.

It was the most receiving yards for a UND player in three seasons, and makes Toivonen the first freshman receiver to lead the Hawks in yards since Greg Hardin in 2010.

While the accomplishment is great, Toivonen doesn’t dwell on it. He has bigger ideas in mind for his team.

This is not an easy feat. The transition from high school football to college football, especially Division I, is very difficult. Some players never can adjust to it.

“It’s a lot more fast paced, and obviously a lot better players,“ Toivonen said. “It took a little while to get used to, with the bigger playbook, but I think it has been a pretty good transition.”

Toivonen has had help along the way. His teammates have helped make the transition from not only high school football, but to a new town and new school.

“Everyone is really nice,” Toivonen said. “When you come up here, you automatically have like 100 friends. You see guys around on campus and it’s fun to be with so many guys who love football and love to play the game.”

While it has been a great season, and great start to his UND career for Toivonen, there isn’t a moment that sticks out to him.

Rather than a specific moment, Toivonen has savored the entire season.

“I don’t think I have a defining moment, the whole season in general has been a lot of fun,” Toivonen said.

Many players enter a season with a personal goal they set for themselves.

Toivonen did not have any such personal goals, but rather focuses on the goals of the team itself.

“I didn’t really have any personal goals, just wanted to get up here and play, and do my best to help the team out,” Toivonen said. “It’s more team goals rather than just setting goals for myself.”

2016 was the first season since entering Division I that UND football entered the season with big expectations. Finishing the season at 9-2 proves that the expectations were reasonable.

After dropping the first two games to begin the season, many had written off the Hawks. After rattling off nine wins in a row, the Hawks have left no doubt that they are a force in the FCS and are poised to host a playoff game.

The Hawks have somewhat lived in NDSU’s shadow football wise in recent years. Now, as the eighth ranked team in the country, they may have a chance to face them in the playoffs for the first time since 1995.

No matter how you look at it, the Hawks are trending in the right direction.

“I hope it continues to build up, and we get better and better players,” Toivonen said. “Obviously if you win games, people will want to come here. We’ve got a pretty good recruiting class coming in next year, so hopefully we keep getting better and better and keep winning games.”

Toivonen as well as the rest of the Hawks will learn their playoff fate Sunday, Nov. 20. The 2016 FCS playoff selection show can be seen on ESPN U at 11 a.m.

Adam Gunderman is a staff writer for Dakota Student. He can be reached at [email protected]