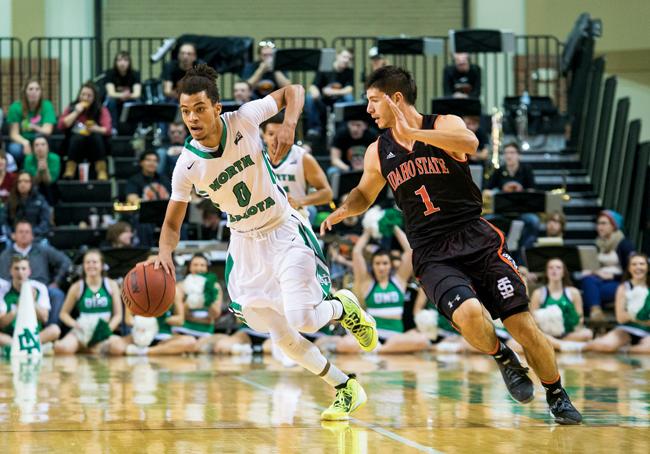 The men’s basketball makes its return this week. After coming off a season that saw the Fighting Hawks host their first ever Division I postseason game at Betty Englestad Arena.

The Hawks will kick off the 2016 campaign Friday, Nov. 11 against Crown College at the Betty.

This season will start on a different foot  for UND. Last year, the team traveled to Italy and France for games in August. This year, their first games will come at a more normal time and location.

Last year, the Hawks were a very young team. They had a good season that included getting to the semi-finals in the Big Sky Conference Tournament. The youth showed at times, though.

A huge advantage of having a young team last year is that they gained experience, and will be back this season.

From last year’s team, the Hawks will return all five starters to go along with seven of their top eight scorers returning.

“A lot of people forget that we were one of the youngest teams in the country last year, so being able to turn things around like we did was a testament to these young men and the hard work they put into to be successful,” head coach Brian Jones said. “Now, we have to be able to continue to mature and take even bigger steps and I think this group is ready for that challenge.”

Adam McDermott, a freshman last year, transferred to the University of Northern Iowa following the season.

After having six freshmen last year, the Hawks will only have two this season.

Spirit Lake, Iowa native Billy Brown joins the team as a freshman. Brown was named to the Iowa all-state second team by the Iowa Newspaper Association as a senior. He averaged 21.7 points per game, good for fourth in state and lead Iowa with 5.6 assists per game.

Kienan Walter will also join the Hawks as a freshman this year, the 6’8” forward comes from Vancouver, Wash. Walter spent a season across the river in Portland, Ore. in which he collected the Trico League MVP for the second-consecutive season.

The Hawks have been picked to finish third in the Big Sky Conference this year in a preseason by the coaches, and fourth by the media.

“It’s going to be a very exciting year in the Big Sky and a very challenging one. The top five teams in these polls have a lot of their key contributors back,” Jones said. “That is going to make this league as tough as it has been since we’ve been it.”

The team who is picked by both the media and coaches to win the conference is Weber State.

The Hawks beat Weber State at home last season and lost to them on the road. They met up in the conference playoffs, but Weber Sate edged out UND in overtime.

Last year, the Hawks were picked to finish eight by the coaches, and tenth by the media.

The big change is attributed the the influx of young talent to go along with the collection of talent that was already on the roster.

As a senior, Quinton Hooker will be a leader for the team once again. Looking at his long list accolades, it is easy to see why.

Last season, Hooker was named a Lou Henson Mid-Major All-American Player of the Year to go along with becoming the first UND player in Division I history to average more than 20 points per game among other awards.

The dynamic point guard Geno Crandall will also look to build off of an impressive 2015. After being a red-shirt his first season, he ranked third in the Big Sky in steals and was second on the team in scoring with an average of 10.8 points per game.

Hooker, Crandall and their teammates will try to improve on their 17-16 record from last year. On paper, it’s looking like they will be able to do just that.