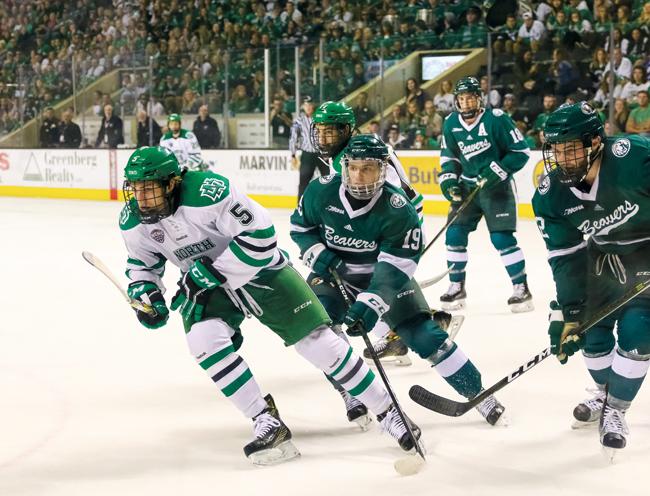 If they didn’t before, the Fighting Hawks now know what it feels like to hit rock bottom and disappointed fans are still awaiting the reloaded Hawks squad to show up.

Renewing a historic rivalry between Minnesota and North Dakota saw more than a clash of two teams, but also two fan bases. The Golden Gopher’s fans made major noise as their chants shook the building, but to solidify their NCAA ranking as second best travelling college sport fans, the Hawk fans drowned them out.

“It’s pretty crazy, it’s a fun atmosphere to play in it was a big rivalry game so those are always fun to play in,” Johnson said. “Overall it was a fun experience I thought the fans were really rowdy so it was a lot of fun to play in.”

While there may be no place like the Ralph when It comes to college hockey, and no greater fans than the ones in green and white this series proved that there are some tough competitors fighting for the title with sharp players, high tempers and higher penalty minutes.

Hayden Shaw made his return to the line-up and proved to be in an important key to the defensive rotation and beneficial offensively for the Hawks as well, as he opened up the scoring with just 1:35 on the clock.

During the first of many power play of the game for UND, Austin Poganski utilized the power plays opportunity with the noticeably improved special team unit, UND increased their lead, 2-0.

The first period brought on 22 of  34 penalty minutes in the game for the Hawks. Fourteen of those minutes were taken by captain Gage Ausmus from an intense altercation with Minnesota’s defensemen Ryan Lindgren. Both parties took a four-minute minor for roughing and served an additional 10-minute for misconduct.

This became a common theme in the game, after Ausmus got comfortable in the penalty box, defensive partner Tucker Poolman and freshman forward Zach Yon joined the party as they both took penalties for roughing after the whistle during a scuffle in front of UND goalie Cam Johnson.

The Hawks lack of discipline helped the Gophers erase the two-goal deficit, scoring both first period goals on power play opportunities. The tied score did not accurately depict the improved goaltending provided by Johnson. The first period Johnson stopped 15 shots, while UND only recorded three shots on goal, he gave the fans a glimpse of hope for a better outcome.

“I just focused on myself instead of the game as a whole and worrying about the outcome,” Johnson said.  “I just tried to focus on my own game and worried about the saves and not the score.”

Game one did not let up for the anxious fans after the Gophers tied up the game in the first period and a scoreless second the tempers settled and the power struggle intensified.

The Gophers responded to every goal that UND put up and in the final minutes of play with an extra attacker, they tied it up for the final time as neither team would be able to score in overtime.

“I’m not happy with the result I thought we had the game there and we let it slip away,” Johnson said.  “I think we have to play a little bit better defensively. I thought we gave away way too many chances, we were very undisciplined, we took a lot of bad penalties that we shouldn’t have been taking.”

Game two saw a change of pace, penalties were called sparingly and the discipline that was missing the day before had been found. Anything that UND felt like they missed out on in game one was brought into the second game, unfortunately for them so did the Gophers.

“That first period I thought was the best 20 minutes of the year so far,” Head coach Brad Berry said.

UND couldn’t manage to get the puck into the net, but it wasn’t for lack of trying with 80 shot attempts, they made some serious efforts with plenty of close calls ringing off the posts. But the Gopher’s goaltending was stronger than ever and sophomore Eric Schierhorn did not back down under pressure.

After a few more close calls from UND, and an unsuccessful penalty shot by sophomore Brock Boeser, the time wound down and the Gophers earned bragging rights until these two teams meet again.

“It’s hockey,” Berry said. “That’s how hockey is. Some nights you’re on the other end where the other team should win, but you win.”

It’s time now to leave this non-conference battle in the past and look onto the NCHC battles ahead, beginning with Denver.

“We are going to have a really good week of practice and get ready for Denver,” Tyson Jost said. “We’re back in the NCHC and this is a huge weekend for us. We are looking for a bounce back weekend and we are excited to get back home and play in front of our fans.”

The Ralph may be just what UND needs to reset and come back bigger and better. The Hawks return to Nov. 11-12 for a home series against Denver, puck drop for Friday’s game is scheduled for 7:37 p.m.