Big Sky at the Betty 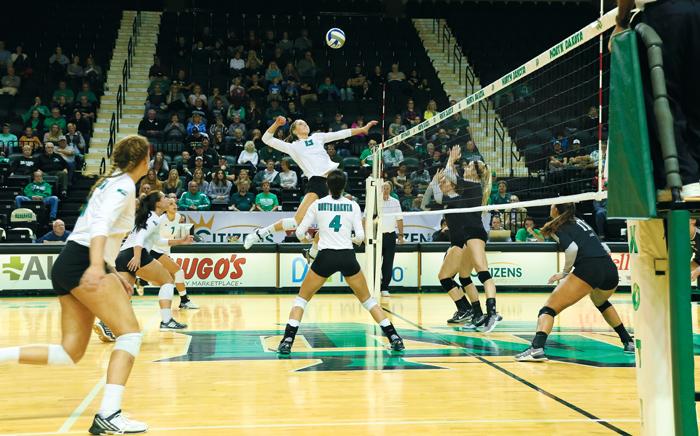 When Mark Pryor took over as head coach of University of North Dakota Volleyball, he had a vision. That vision was to get better each year, and eventually compete for a Big Sky Championship.

The Hawks, who had previously been on the road for a long time, were finally at home for the weekend, the crowd at the Betty Engelstad Sioux Center got to see something they love: a weekend sweep. This weekend’s prey for the Hawks was Eastern Washington and Idaho.

Last Thursday night  the Hawks hosted the Eastern Washington Eagles. The first two sets came easier for the green and black, but the third set wasn’t as easy. As the Eagles led 23-18, looking to continue the match in front of 780 people at the Betty. Alivia Fraase,  the freshman from Fargo, N.D. was able to hold the serve for six straight points. The Hawks rallied back for a wild 25-23 win. The win gave the Hawks their 20th win of the season.

“Tonight we played really clean in the first two sets, which was a great sign,” UND head coach Mark Pryor said. “Only four hitting errors in those two sets combined gave us a good cushion. That third set was just a roller coaster. Being down 7-0, and then being down 23-18, and then siding out and running off six straight stops was a good sign for us.”

UND was led by Faith Dooley. She finished the match with 12 blocks  and three kills. Tamera Merseli, a native of Serbia, almost had another double-double as she finished with nine kills and 14 assists.

On Saturday night, UND looked to take care of the Idaho Vandals. These two teams are slowly starting to become one of the bigger rival games in the Big Sky.

On senior night, it was UND took care of business, and kept up to pace with Northern Arizona in the Big Sky. The win over the Vandals brings the Hawks to 12-2 in the conference.

The weekend sweep sets up a huge game in Flagstaff between Northern Arizona and UND.

Both teams are already in the seven team field, but whoever wins this match will more than likely be hosting the Big Sky tournament. That would be huge for the Hawks, who have been outstanding in their own nest.

UND will head on the road to face Northern Arizona, Nov. 10 in Flagstaff, Ariz. at 9 p.m.