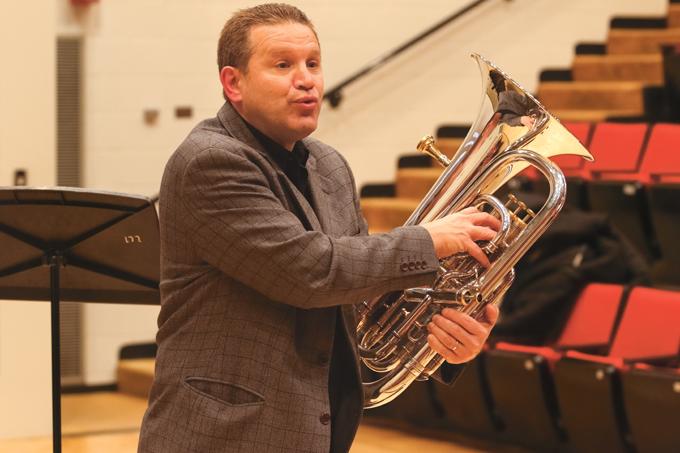 This lecture was the finale in a series of lectures held by UND Music Department Chair Katherine Norman Dearden, Ph.D. The purpose was to assist music students who are preparing themselves for writing their graduate thesis.

“A number of years ago, I had to do the same thing,” Pugh said. “As a master’s student, I had the same class. It’s quite a daunting task to write that final paper, so hopefully this helped them do that.”

The lecture was cleverly titled “The Evolution of the Salvation Army Euphonium Solo with Brass Band Accompaniment.” The title corresponds to Pugh’s graduate thesis when he was in college.

Pugh covered the founding of the Salvation Army Band, its key figures, as well as their own protection of their music.

Much of the music development and the people who contributed were kept mostly private, thus leaving much of the public left not knowing much about their key instrument. This instrument being the euphonium.

For the majority of the hour-long lecture, Pugh presented his thesis in the form of a slide show and discussed the different interviews he would set up in order to acquire the information he needed.

Later on, Pugh played his euphonium for two of the pieces covered in his thesis. He was accompanied by his wife, Sharon, who played piano beside him.

“She has a real job, so for her, at nine o’clock at night, have to get music together is not always the best,” Pugh jokingly said. “But it takes us back to our doctoral days when we had a two-year-old at the time.”

The job he refers to is at Poppler’s Music, Inc. where Sharon continues a family passion for music education.

For those of you who are so curious, a euphonium is a brass instrument that can be described as a “baby tuba.”

For the music-savvy, it is more of a baritone horn that has evolved mostly within the past 40 years or so.

The word is Greek for “sweet sound.”

Pugh admitted, as well as explained in the lecture, that the Euphonium is not a well-known or popular instrument.

“Everyone’s not the quarterback,” Pugh said. “You need those right guards. You need it for band.”

Pugh has been playing the euphonium for about 44 years and now teaches a course for students on playing the “right guard” of instruments.

“I started in fourth grade,” He said. “This is my life. Every day, my job is to get a warm-up, getting to practice my horn. I think it’s great.”

Pugh is an instructor at UND for low brass instruments. These instruments include the euphonia, trombone, and the tuba.

Pugh is also the founder and director of the Dakota Trombone Choir. This choir is made up over 2-dozen trombone players.

One of these players was former UND President Robert Kelley.

“He was Bob for one hour a week,” Pugh said in response to being “in-charge” of the president.