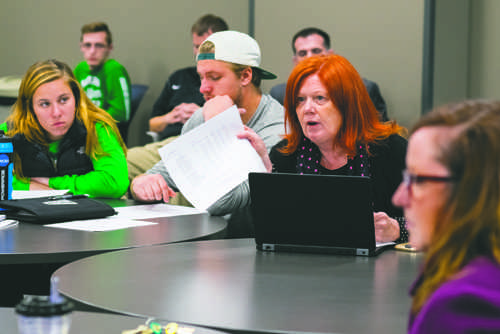 While some have celebrated President Kennedy’s email to campus saying no sports will be cut, the announcement left me with more questions than answers.

Included in the Intercollegiate Athletic Committee’s (IAC) proposal to Kennedy were several specific recommendations for how to find the money to cover the expense of keeping all 20 sports at UND.

These included increasing student fees, increasing institutional support of athletics by $7.3 million, increasing ticket prices by 25 percent and reducing the number of free tickets, increasing the share of revenue from ticket sales at the Ralph and Alerus Center.

The proposal also included funding all of these sports with the full amount of scholarships. In his email announcement, Kennedy “affirmed” the plan while at the same time noting the difficulty with several of the aspects of the recommendation:

“We will pursue options suggested in the IAC recommendation though feel compelled to recognize the fact that all will depend on the agreement of others and uncertainty exists that such hoped for additional funding will materialize.”

It seems a bit premature to announce no sports will be cut when many of the funding mechanisms seem up in the air. It’s clear that athletes and supporters on certain teams will be very upset if programs are cut, but the drawbacks associated with funding the proposed recommendations are much more spread out and at times difficult to measure.

First, student fee increases should be taken seriously. Kennedy acknowledged this in the statement:

“Enhanced student support in terms of increased fees would require broad student support and would occur at a time when students may be also asked to consider supporting an upgrade of the Memorial Union.”

While tuition is usually the focus of conversations on college affordability, fees add up. Students have already seen rapidly increasing costs in periphery areas of education like textbooks, room and board.

Under the suggestions from the IAC, student fees allocated to athletics would increase from $10.69 per credit hour to $14.50.

That’s $45 more a semester for every student enrolled in 12 credits or more, which is not an insignificant amount considering potential other fee increases. This cost is spread out among a lot of students and over a long period of time, which reduces pushback to it, but that doesn’t make it alright.

In order for it to make sense to move $7.3 million from one area of the university to another, it must be true that this athletic expenditure takes precedent over whatever else it would have spent on.

In an era of tight budgets, it seems hard to imagine that there is $7.3 million to be easily found in the university that won’t be missed elsewhere. Will the $7.3 million come from money that would have been spent on other student services? On research? On the millions of dollars in deferred maintenance the university has already amassed? These are all valid concerns when thinking about the university as a whole.

Additionally, if the money is moved, it’s a very real possibility the university will again have to deal with budget cuts due to declining state tax revenue and appropriations. Future plans should be sustainable, and the university should be able to signal to the North Dakota Legislature that it is a prudent steward of taxpayers’ money.

Finally, negotiations with the Ralph and Alerus Center for more of the ticket revenue seem like they are far from a done deal. In an article published on Oct. 18, Tom Miller of the Grand Forks Herald wrote:

“Although Kennedy acknowledged those recommendations require third-party approvals, the president stressed the university would not be revisiting cuts if the recommendations don’t come to fruition.”

This makes it sound like even if UND doesn’t see increased funding, no sports will be cut. If this is true, it even further complicates the future of funding for maintaining all the athletic programs.

In conclusion, it seems that there are many issues with how exactly UND will afford to keep all its athletic programs. Many of these issues are acknowledged by Kennedy in the same email in which we are told all of the sports teams will remain, and that doesn’t seem to provide much more certainty to the average member of the UND community.

I hope that the next few weeks provide more clarity as to what the future holds. When final decisions are being made, the UND administration should consider the needs of all constituencies, whether they are athletes, students, faculty, fans or North Dakota taxpayers.

Some decisions have very clear and immediate repercussions, but equally important is the consideration of the slightly less visible effects and the long term consequences associated with these decisions.

Sean Cleary is a copy editor for The Dakota Student. He can be reached at [email protected]