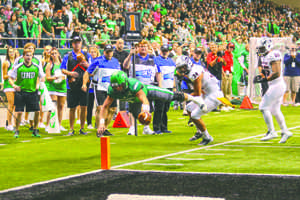 While the final score was lopsided, it does not indicate how close the first half was.

“The comfort level is getting higher and higher every week, not thinking too much, and just playing, I think that’s what’s helped me the most,” Keaton Studsrud said. “Now I’m just going out there and seeing things a lot better, and preparation has been a lot better.”

The 100th home-coming game started with the Fighting Hawks driving down the field for a touchdown. Quarterback Keaton Studrud had only one incompletion on six attempts on the drive and capped it off with a touchdown pass to Luke Stanley.

On the ensuing kickoff, Thunderbirds’ returner Raysean Pringle took the kick for a 97-yard touchdown immediately tying the game at 7-7.

Once the Hawks got the ball back, they were not able to do much. They punted after three unsuccessful plays.

Two plays into their second drive, Patrick Tyler hit Brady Measom for a 68-yard touchdown. The pass itself only went forward a yard or two, but a missed tackle left nothing but open field ahead of Measom as he ran for 66 yards after the catch. SUU had a 14-7 lead.

The teams would punt back and forth for the remainder of the quarter.

In the second quarter, UND’s offense kicked into gear. They had a five play, 72-yard touchdown drive capped by a 15-yard Brady Oliveira run. The score was now tied, 14-14.

After giving up the momentum to SUU after their two scores, UND had gotten it back.

“It was huge to answer the scores.” Head coach Bubba Schweigert said.

The Hawk’s defense was up to the challenge of holding down the Thunderbird offense. They pinned them down at their own seven-yard line and forced a punt.

With the SUU punt coming from their own end-zone, The Hawks got good field position to start the drive on offense.

From the SUU 48-yard line, UND drove the ball down and John Santiago scored the touchdown from four yards out making the score 21-14.

The Thunderbird offense woke up on their next drive. They drove the ball down to the UND 10-yard line, but the defense was resilient. They limited them to a field goal. 21-17.

With time winding down in the quarter, the Hawks’ defense would come up big again. Dylan Bakker forced a fumble.

With a short field, Keaton Studsrud found Noah Wanzek for a 7-yard touchdown with 23 seconds remaining in the half. The score was now 28-17.

SUU was able to get some yards before halftime, but missed a 53-yard field goal.

The Thunderbirds scored a touchdown on their first drive of the second half making the score 28-23 after a missed extra point, but that would be all the Thunderbirds would get for the remainder of the game.

At the end of the third quarter, Studsrud continued his excellent game with a 27-yard touchdown pass to Travis Toivonen. The freshman receiver would finish with the most receiving yards for the Hawks with 99 yards on the afternoon. UND was starting to run away, 38-23.

On the ensuing SUU drive, Brian Labat stepped in front of pass and intercepted it for UND’s 12th interception of the year.

With the good field position given to him by the defense, Studsrud would find the end zone by air for the fourth time on a 13-yard touchdown pass to Demun Mercer. 45-23.

The Thunderbirds were quickly reminded on their next drive that it is usually a no fly zone when you’re going up against the Hawks’ defense. Jake Hanson intercepted Tyler for the defense’s 13th interception of the year.

The Hawks proceeded to drive the ball by ground all the way to the SUU 7-yard line. They took a knee with 1:36 remaining in the game on 4th down to turn the ball over and not run up the score.

The Thunderbirds were not able to do anything with the time and the final score was 45-23.

Quarterback Keaton Studsrud had a monster game. He posted career highs in touchdowns with four and passing yards with 282. He had 20 completions on 27 attempts and averaging about 10 yards per pass.

Kyle Norberg had an excellent day against a very good run defense. The fullback led all rushers as he ran for 73 yards on six carries.

The win not only made UND 4-0 vs the Big Sky Conference, but was the fifth in a row, which is the longest winning streak UND has had since making the jump to division one.

When adversity has hit the Hawks, they haven’t let it get to them all year.

“The one thing is our guys have been responding, Wish is really good to see,” Schweigert said. “I think we are maturing as a team.”

UND travels to Pocatello, Idaho next weekend to take on the Idaho State Bengals. Kickoff is at 3:25 p.m. on Saturday, Oct. 22.