Fighting Hawks looking to clean up their game 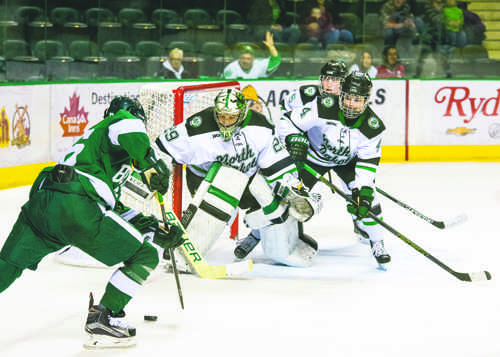 Lexie Shaw protects the goal against Bemidji State University at the Ralph Engelstad Arena on October 18, 2015.

After a series plagued with penalties, UND heads to SCSU and tries to cut down their tie in the box

The University of North Dakota women’s hockey team should be used to tough crowds and long bus rides by the time this weekend is over.

After starting out the 2016-2017 season with a win and a tie last Friday and Saturday against Mercyhurst, the Fighting Hawks are back on the road this weekend to play a WCHA match against St. Cloud State University. This is the first conference game for both teams.

UND ended the Huskies season last year by scoring 12 goals in two games in the WCHA quarterfinals at the Ralph last March. Safe to say that the Huskies will be looking for revenge this weekend at the Herb Brooks Hockey Center in St. Cloud.

Last weekend UND picked up a win and a tie in Erie, Penn. against the Mercyhurst Lakers. At the Friday game the Hawks took an early 3-0 lead and never surrendered it winning 3-1. Saturday, they tied the Lakers 1-1.

SCSU are already two weeks into their season, and it’s safe to say the Huskies haven’t gotten off to the best start this season. In the opening week, SCSU hosted perennial power Wisconsin and got swept by the Badgers.     The Huskies were shut out on Friday night by the Badgers, but put up a better fight on Saturday night. In front of a paid attendance of 305 people, the Huskies lost 4-2, but had goals by Hannah Potrykus, and Julia Tylke. This weekend will mark the Huskies third straight home series against the Hawks.

Last weekend, the Huskies split with the Merrimack Warriors in St. Cloud. At 1-3 in the non-conference, this is a big series for the Huskies, who will look to get off to the right foot in the WCHA against the 1-0-1 Fighting Hawks.

The big question coming into the season for the Huskies is shots on goal. They were out-shot by an average of 11 shots per game.

Tylke is a player to watch this weekend. She returns for the Huskies after finishing last season with 24 points. (9 G, 15 A). She will definitely be at the top of the scouting report for Hawks’ head coach Brian Idalski.

The game plan for UND should be fairly simple this weekend: stay out of the penalty box, and not allow them to get their power play going. Lexie Shaw needs to be rock-solid in net as well for the Hawks.

The WCHA is one of, if not the hardest conference in women’s college hockey, so getting off to a 2-0 start would be huge for Brian Idalski and his squad.

After this series against SCSU, UND is home for the first time of 2016 in beautiful Ralph Englestad Arena for a two-game series with WCHA rival Minnesota-State Mankato.

Hunter Plante is the staff writer for The Dakota Student. He can reached at [email protected]