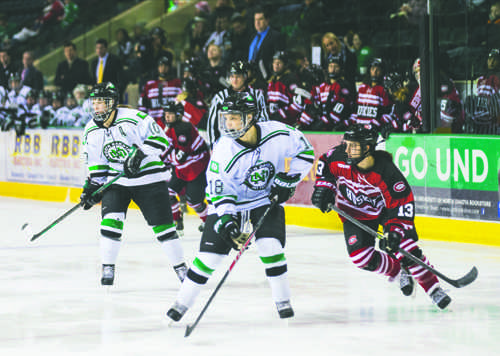 UND plagued with penalties against Mercyhurst, forced to setter for tie in game two

The UND Fighting Hawks was in Erie, Penn. for an opening weekend series with Mercyhurst last Friday night, and Saturday afternoon.

The Fighting Hawks play in one of the nation’s toughest conferences, the WCHA. The WCHA traditionally has powerhouses such as Minnesota or Wisconsin; this is a conference that wins national titles year in and year out.

Head coach Brian Idalski and his squad have made it clear how important the non-conference schedule is, because his team came ready to play on Friday night.

The Mercyhurst crowd of 836 people piled into the Mercyhurst Ice Center, but they didn’t have much to cheer about.

Not only did UND get to celebrate the win, it also got to celebrate a miracle that happened on the ice that night. Lisa Marvin, who hasn’t played in a North Dakota jersey for two years due to a near-fatal accident, finally got back to playing the game she loves last weekend.

Marvin was on the ice for all three of UND’s goals, and she almost capped off an incredible night by putting one in the back of the net.

UND didn’t take long to jump on the Lakers. Halli Krzyzaniak gave the Hawks the early lead, as she fired a wrist-shot past Mercyhurst goalie, Sarah McDonell. That goal came at 3:56 of the first period on the power-play.

Gracen Hirschy was all over the stat-sheet for UND on Friday night. After assisting on the Hawks’ first two goals, Hirschy decided it was her turn to put one in the back of the net. Hirschy scored at the 17:51 mark of the first period. Hirschy finished the day with 3 points.

Lexie Shaw saved nineteen Mercyhurst shots on the night, including nine alone in the second period.

On Saturday afternoon, UND’s offense wasn’t as powerful as the night before, as the series finale ended in a 1-1 tie.

UND scored first in this one as well, and this goal was a power-play goal, much like the first two goals were for the Hawks on Friday night. Sophomore Anna Kilponen scored her first-career goal, after nine points she had her freshman year was all from assists.

Much like Krzyzaniak’s goal the night before, Kilponen scored on a wrist-shot from the blue-line that buzzed by the Laker goalie at 15:47 of the first.

UND would hold onto that slim 1-0 lead for nearly 40 minutes, but the Lakers scored late in the third for a 1-1 tie. UND outshot Mercyhurst 2-0 in the overtime period, but those two shots didn’t find the back of the net.

Lexie Shaw was outstanding for the second straight night, finishing the night with 26 saves.

The Hawks’ spent startling 30 minutes in the penalty box over the series, taking nine minor penalties in game one and six in game two.

“You kind of knew coming in with the new emphasis on obstruction and some of the things were going to be a special teams battle,” Idalski said. “I thought we responded to that regard.

The Hawks penalty kill were put to the test quickly in both games with penalties coming within the first ten minutes of play.

“I thought the kill was super good and I thought the power play looked pretty good,” Idalski said.  “Especially for the beginning of the year and not having a whole lot of time to look at it. Both of them did a nice job.”

UND was strong on the penalty kill, as Mercyhurst went 0-15 during their power plays for the series.

The Fighting Hawks remain on the road to St. Cloud for a series against the Huskies Oct. 7-8. The first puck drop is scheduled for 6:07 p.m.

Hunter Plante is the staff writer for The Dakota Student. He can be reached at [email protected]