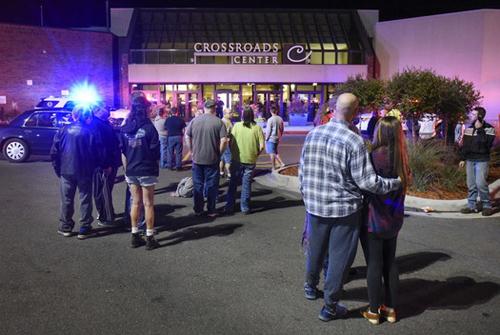 On Sept. 17, a 20-year-old man started stabbing people in a Minnesota mall. Dahir Ahmed Adan walked into the Crossroads Center Mall in St. Cloud and injured 10 people for what seems to be no apparent reason.

He was wearing a private security uniform, so no one suspected a thing when he walked into the mall around 8 p.m. According to a witness, he then muttered something about Allah, asked a shopper if they were Muslim, and then started stabbing other shoppers. He was able to move around and travel to multiple stores and injure shoppers across the entire mall.

Luckily, a hero happened to be inside the mall just at the right time. Jason Falconer, an off-duty police officer, was exercising his right to carry a firearm, and was able to protect the mall-goers by shooting the attacker.

Falconer is the owner of Tactical Advantage, a firearms training facility. He is clearly very experienced in handling a gun and was able to quickly analyze the situation to help others. If we as Americans didn’t have the right to carry a firearm, who knows how many more people the attacker would have hurt, or even killed.

There are plenty of stories out there that have the same pattern, and not just with off-duty police officers, with regular people who choose to have a concealed carry permit.  In these instances, if the right person wasn’t legally carrying a gun, matters would have gotten a lot worse for all involved, just like with the mall incident in St. Paul.

According to the Western Journal in January 2015, a group of armed robbers tried to mug a man at Sonic. 23-year-old Joseph Toombs was sitting in his car trying to order his food when two or three men with weapons surrounded his door. He was able to draw his firearm, and shoot before the attackers mugged him. He shot one of the men, who later died in the hospital, and the other two fled the scene.

In March of 2016, an armed man walked into a gas station late at night in Dundee, Michigan. He was going to attempt to rob the convenience store, but the 60-year-old cashier was quick to react. The cashier pulled out his firearm that he was legally carrying, and told the robber to leave the store. The man told the cashier he was “just joking” and left the gas station immediately according to The Monroe News.

We hear a lot of bad stories in the news about what guns do, but rarely do we ever hear about the good that comes from carrying a weapon. Taking away the right to bear arms would only be disarming the good citizens. Criminals don’t follow the law. They will find a weapon and commit the crime no matter what the law says they can or cannot do.

Emily Gibbens is a staff writer for The Dakota Student. She can be reached at [email protected]