Another week, another dance 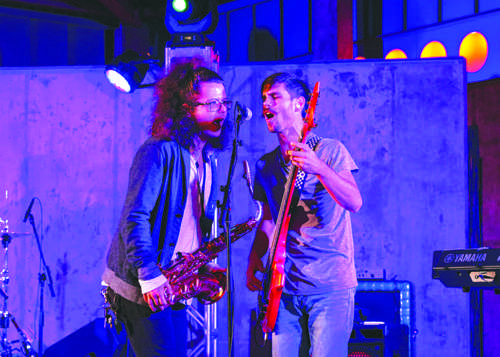 As seems to be the tradition with The Dakota Student, we have yet another one last street dance and festival downtown, this time sponsored by JLG Architects. JLG, a prominent development company in Grand Forks and the greater I-29 Corridor has been a prominent part of the community and the state of North Dakota for the past decade, winning dozens of awards for design and started the street dance as a celebration of their 25th anniversary.

This dance has now entered its 3rd year and compliments the already existing festivities surrounding the Potato Bowl.

Furthermore, while JLG Architects has traditionally been well loved and praised by the city, they have recently become the center of some controversy, as a result of their hand in plans to remove the Arbor Park in favor of a new apartment complex.

This year, the street dance, held in Town Square, was opened by Fargo/Moorhead based Ska Shank Redemption, and headlined for the third consecutive year by The Fabulous Armadillos, a Minnesota cover band who has performed across the Midwest and internationally.

While the Ska genre is seldom represented in North Dakota, the band performed well and managed to nearly perfectly emulate their sound in the studio live, a significant accomplishment.

Furthermore, the band sounded more pop based than punk, and resembled Less Than Jake artistically. As for The Fabulous Armadillos they were more of a traditional 80s rock cover band with some pop mixed in, and their vocalist Pamela McNeil is one of very few who can cover both Heart, and Merry Clayton in the same concert demonstrating significant vocal power and range.

While the music was obviously the most important part of the show, the food and wine was also prominently featured. As per usual it seems that there isn’t a street event in Grand Forks without Rhombus Guys showcasing their locally brewed beers in the form of a beer garden, and at this street dance they showcased four of their newest creations. The Rhombus Guys beer was particularly hoppy this around, especially in their new Oktoberfest brew, and it is always a delight to try the freshest and newest beers in Grand Forks. For the less adventurous, there was the standard fair with canned Bud Light, Miller Light and Red’s Apple Ale. Lastly, for the wine lover, Helix Wine & Bites was also present offering a wide variety of both red and white wine to ensure there was the perfect beverage for everyone at this event.

Food, on the other hand, was far more limited. As I have discussed in the past, placing the musical offerings away from the restaurants puts you at the mercy of whatever vendors happen to be available, and in this case we were limited to one option, Wild Hog Smokehouse.

As a result of the light rain throughout the day, it was difficult for the cooks to adequately prepare the barbecue, which caused the barbecue to come out as an unusually substandard product, lacking consistency or flavor, which forced people to be dealt a surprise, as Wild Hog barbecue sandwiches are usually quite the treat.

The street dance also had one unfortunate problem that was beyond its control, inclement weather. Throughout the entire day, rain continued to fall which soaked all of the seating options, and due to the lack of overhead covering meant if you wanted to attend the dance you were going to get wet. Furthermore, this severely reduced turnout, as the venue never reached more than half capacity, with many leaving before the first band even began their set.

Overall, the dance was a solid addition to the Potato Bowl festivities and JLG architects has created a wonderful tradition.

David Owen is the opinion editor for The Dakota Student. He can be reached at [email protected]