The French Fry Feed was underpopulated this year 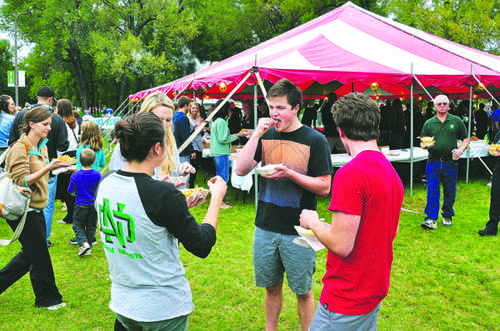 Grand Forks has a historically rich and beautiful relationship with potatoes.

In fact, the relationship goes back for more than 50 years, which is the main reason why the city of Grand Forks takes an entire week to celebrate one of the largest potato growing regions in the United States.

The mouthwatering aroma of fresh cut fries filled the air as organizers of the world’s largest French Fry Feed geared up to serve a total of 5,070 pounds of fries to the hungry fans gathered in the park.

The French fry feed is something many students and members of the community look forward to every fall, and this year, it is estimated that over two and a half tons of french fries were consumed.

The french fry feed typically gathers thousands of people to the park —with tremendous crowds and lines for fries— but Thursday night’s feed ended up catering to an underwhelming amount of people who were mostly steered away by weather concerns.

“I was a little disappointed this year The weather wasn’t great and I didn’t feel like there was a big crowd,” UND senior Josie Thomas said. “There’s usually huge lines that take forever, but this year I was able to walk right up and get my friends with no wait.”

Grand Forks residents were expected to eat their way to a new community record during the feed, but ended up falling short of the goal.

This year, the feed ended up serving 5,070 pounds of fries — 150 pounds short of the record that was set last year.

Todd Phelps, the Potato Bowl chairman for the past eight years, said there were plenty of potatoes on hand to feed the usual crowd and shatter the record set last year, however, he believes the overcast weather and the rain kept away the necessary crowd to put away the potatoes.

“Because of weather the crowd was a little light,” Phelps said. “We normally have thousands of people in the park.”

Besides the lower than usual turnout, smiles and laughter could still be seen and heard all around the park as children, adults, and students indulged in baskets of free fries.

“Our overall goal is to spread the word that the potato is a healthy vegetable and can be enjoyed in many forms,” Phelps said. “Regardless of the weather, I believe this event continuously helps people from Grand Forks, East Grand Forks and surrounding communities love potatoes and join together to celebrate Potato Bowl week.”