Adelphi fountain, a symbol for UND 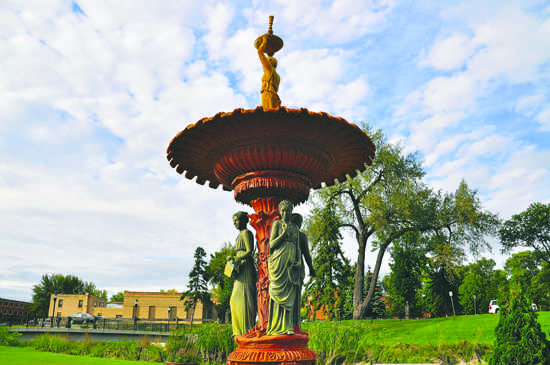 The Adelphi fountain, donated by the Adelphi Literary Society in 1905, stands on campus near Hughes Fine Arts Center and the Hopper-Danley Spiritual Center on September 11, 2016. Photo by Daniel Yun/ The Dakota Student

Built in 1907, the Adelphi Fountain was the first purely aesthetic addition to campus as a gift to UND from the Adelphi Literary Society. Since 1928, the fountain has remained on the west bank of the English Coulee in between the Hughes Fine Arts Center and Burtness Theater. The Adelphi Fountain was first built in the center of campus near Old Main, where the eternal flame flickers above Old Main Memorial Plaza. In 1911, it was moved near Burtness Theater for 17 years before being moved across the river. Adelphi, UND’s first student organization, was established in 1884 and continued to have strong student participation until it lost many members in the ‘20s. The group was revived in 1982 and plans were made to refurbish the structure.

In 1969, the English Coulee flooded, causing a significant amount of damage to the fountain. The fountain, which was already in need of repair, had survived many harsh winters.

In the many decades it has sat on campus, the fountain fell into bad condition. Three decorative figures which used to adorn the base and the top of the fountain faded.

The fountain depicts Pythia, the Oracle of Delphi herself, holding a plate which inspiration is supposed to flow out from in the form of water. Pythia is the name given to the current priestess in the Temple of Apollo. During this era, Pythia was one of the most powerful women in the world due to her wisdom, insightfulness, respected counsel and celebrity.

The three Muses surrounding the bottom of the fountain represent many cultures. One muse holds a sheaf of wheat, another a scroll and the third carries a lyre.

A sheaf of wheat symbolizes a sign of charity and love. The harvesting of wheat is a sign of advanced love and charity, and the field the wheat grows in is representative of the church. The scroll is a symbol of learning, enlightenment, communication and sacred writings. The lyre is a symbol of music and harmonics, poetry, Classical Antiquity and Greece.

The first repair to the fountain happened in 1976 when UND installed a new water recycling pump system.

John Rogers and his father John Rogers Sr. created a proposal in 2002 to restore the fountain. However, funding for this large restoration project wasn’t available. Before enough funds could be committed to the restoration project, Rogers Sr. passed away. He was a Dean of the College of Visual arts and a professor of sculpture for over two decades. Rogers Sr. had aspirations of restoring the fountain as far back as 1980.

Very little hope remained in the restoration of the Adelphi Fountain.

Then, in 2006, the UND Foundation received their second largest donation totaling up to $10M from the estate of Roy and Elnora Danley. Unlike a lot of big donors, the majority of the Danley gift is not designated for a specific major building project or program. Instead, $1M was programmed for smaller projects and the remaining $9M was used for whatever UND deemed a “priority need.”

Rogers Jr. put together a new proposal with Jenny Cole, a friend and fellow sculptor, and presented it to UND.

“The bottom line is that this is a work of love for me. I grew roaming the halls of the Hughes Fine Arts Center and the fountain was as important a UND icon for me as the eternal flame and the hockey puck,” Rogers Jr. said.

The gracious estate donation from the Danleys resulted in the restoration of the fountain in 2007, construction of the “celebrated” memorial wall and spiritual center — all within close proximity to the fountain. The donation also helped fund a garden near the entrance of the Wellness Center and the meditation room inside.

Besides restoring the main structure, a brick sidewalk and cement benches were installed along the edge of the coulee leading to the fountain. In past year, the fountain had been used as a flowerbed. Since its restoration, however, flowers have been planted around it.

“I just find it very special that this happened, and that the quest for beauty can slip from generation to generation as it should be,” Rogers Jr. said.

Nick Sallen is the editor-in-chief for The Dakota Student. He can be reached at [email protected]