Last festival before the frost 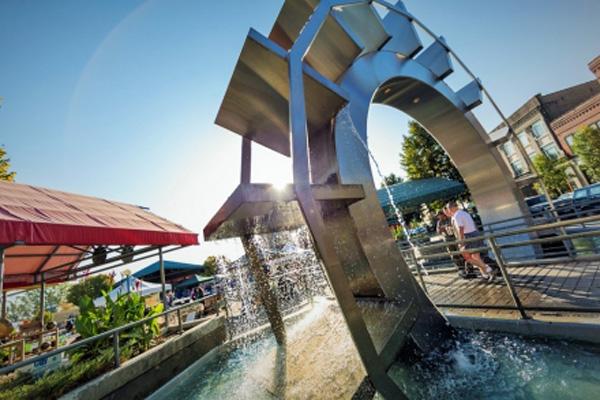 The street fair featured artisans aand vendors from around the country. Photo courtesy of visitgrandforks.com

This past weekend, we had one last festival in the city of Grand Forks, over one year in the making. The Downtown Street Fair hosted by the Downtown Development Association, was a textbook example of a street fair done right, and they appear to have taken many steps recommended by the community which were suggested after the Grand Forken Festival, despite being a separate promotion.

For starters, the festival went across two separate days and had a heavy night-time component, which allowed for far more participation from the college town. In this particular festival they also decided to focus on quality over quantity, having just four stages for bands to perform on, and were far more centralized in the down-town bar area. By keeping the events in close proximity to hot-spots such as Brick and Barley, and Joe Black’s they were able to allow the traffic to naturally flow from the event into the bars between sets. Lastly, they were able to secure liquor permits to allow the vendors to carry alcohol, with a focus on both tried and true American domestics, such as Bud Light, as well as the smaller craft brews.

The festival this year also decided to focus on traditionally popular music as opposed to the experimental. Throughout the entire festival the bands on the main stage stuck with the traditional top 100 hits from the 1980s such as Journey’s “Don’t Stop Believing”, and Kenny Loggins’ “Footloose”, with a healthy mix of modern country added in. The final act and headline of  Saturday was the highly rated local talent Rhyme or Reason, a staple of the North Dakota country music scene, and drew in well over 100 people with ages in the audience ranging from their late 50’s to just past 18. Rhyme or Reason was also able to draw in people from other cities in the region, with some driving all the way from Fargo just to see them perform.

While there was plenty of entertainment, there was also a renewed focus simple food options provided by the vendors to be supplemented by the restaurants. This year, more than three different food trucks were present with a wide variety of carnival type food available which while lacking variety was the perfect snack. Additionally, due to the changed location and newfound proximity to the restaurants it was easy for fairgoers to step in to have a sit-down meal, while still being able to listen to the music, which decreased the traffic and clutter, while allowing those that preferred the more meal oriented vendors from previous events to still have that option available.

Lastly, while the night-events catered to the more adult crowd, the day-time was perfect for families and shoppers, with more than a dozen merchants, and a dedicated space in the park for the children to play.

As a result, this festival was successful in what it sought out to do, provide everyone with something enjoyable, and bring much needed revenue to the town. This is just another in a long line of successes for the Downtown Development Association, and they continue to grow in both ambition and execution.

David Owen is the news editor for the Dakota Student. He can be reached at [email protected]