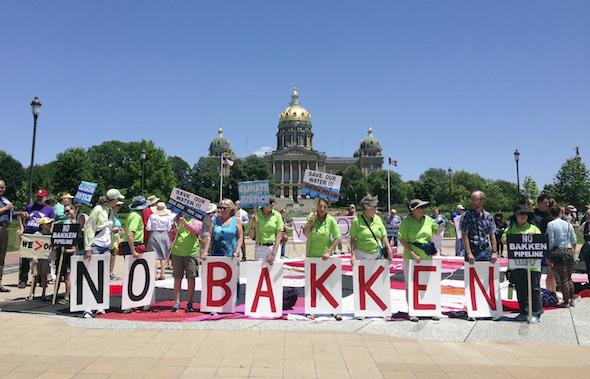 A brief histroy of the stuggle between nature and business

The North Dakota Access Pipeline Protests continue today, as the standoff between the pro-Native American supporters and Energy Transfer Crude Oil Company, LLC nears its third week with no clear end in site. Today the Dakota Student, in preparation of the courts expected ruling will go over all of the information and the evolution of the protest, from a peaceful demonstration to one filled with violence and distrust by both sides.

The Beginning: The pipeline was initially started with ground breaking on May 24th 2016, but notoriously absent was controversial approval of the pipeline crossing water which was required from the Army Corp of Engineers. This easement would be required to go over the sacred river near tribal land and was part of the proposed and approved design, yet this was the first time concerns were noted, or the project stalled. As the pipeline progressed and approached these areas, the Army Corp of Engineers would continue to delay the granting of the easement, but finally approved the crossing on July 27th, 2016. This approval while relatively ignored, was the first steps in the conflict, as tribal leaders of the Standing Rock Sioux began to organize and launched what could be described as a monumental grass roots campaign attempted to educate and inform the state of North Dakota about the potential consequences and how the Army had ignored their desires to stop the pipeline due to sovereignty and water access concerns.

Protests begin in earnest: After the failures of the tribe to stop the crossings approval, the pipeline continued towards the tribes sacred land unabated, with only small reports of sabotage or miscreant activity, but on August 16th, the Bismarck Tribune reported that work had finally stopped as upwards of 600 people with members from more than 30 tribes had gathered in solidarity against the pipe-line. This standoff basically continued with small exchanges on either side, such as man on horseback faking charges against the pipeline, and individuals tying themselves to the machines, but no real injuries had occurred. At this stage of the protests incidents were ramping up, with the horseman continually charging closer and closer, to the security forces on the pipeline, and had resorted to throwing found objects at not only the police in the area but also at the private security hired to protect the pipeline. From this point forward, as conflict and countermeasures were amped up on both sides it appeared that bloodshed was inevitable as opposed to the hope appeared that level heads would prevail, while both sides awaited a US Court decision on whether or not the pipeline was in fact constitutional, that is to say whether or not the Army actually had the authority to approve the pipeline in the first place over the sacred land and river.

As the pipeline continued to do its best to work, it appeared as though only a single spark would be needed to provoke a potentially violent response from security to protect its pipeline, and this spark finally ignited with an almost full scale riot over the course of the weekend from September 2nd to 5th, and while the details are unclear as to who provoked whom, and whether or not the security were justified in their actions, six protestors were injured by guard-dogs, and nearly 30 were sprayed with harmful chemicals such as mace. Furthermore, it is unclear how many private security folks were injured in the scuffle but it is known that the protestors crossed the neutral zone’s fences armed with sticks, throwing found objects, and of course their usual horseback charge techniques which likely provoked the private securities response.

As of September 7th this is where the story ends, but be on the lookout for more information. Our hearts go out to all those affected and injured by actions on both sides, and we hope that level heads prevail as we await a court ruling.

David Owen is the news editor for The Dakota Student. He can be reached at [email protected]