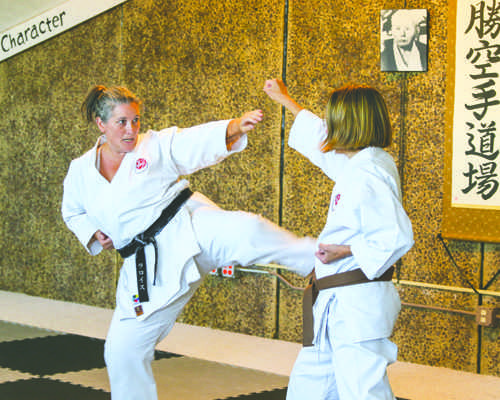 Shotokan karate is used as self-defense. This is the first thing that Sensei LaRoyce Batchelor explained. Batchelor is the sensei of UND’s Hisshou Karate. Shotokan is the certain type of karate that Hisshou focuses on.

“If everyone practiced karate then violence would be nonexistent,” Batchelor quoted from the Japanese culture.

Karate is based off of the idea of respect for everyone, even your opponent. The class bowed before starting, sparing or leaving. The bow is meant as a sign of respect and appreciation of the other person.

Batchelor wasn’t always a sensei. She came to Grand Forks for the university and searched for a dojo to practice her discipline further. Batchelor found no signs of a dojo in this area so she went to her sensei for advice. He told her to start up her own dojo. Batchelor explained to me that he is not the person to say no to. This turned Batchelor in search for a sensei position which means she had to send an application and commit herself to the practice for her lifetime.

The focus and commitment is the hard part for most students, even more than the physical. Batchelor explained that this isn’t the place for students to dip in and out without care. It affects the flow of their tight knit group. They want people to join with the intention of sticking with the program.

The class was full of people of all different sizes, ages, and ethnicities; but they all had one thing in common: they were all deeply focused on their sensei. All throughout the class Batchelor called karate a discipline. They call this a discipline for a reason. This is not a sport for the feeble minded and the uncommitted. The students need to commit their physical bodies and minds to each class. They strive for perfection and purpose.

The Hisshou class is consumed with the Japanese culture and language. With each move or opponent, there is a word that describes it. Shotokan karate is immersed in the culture. The students are taught more of the reason why they are practicing this intense discipline.

When I asked the students why they practiced most of them had quick, decisive answers until I asked a brown belt named Dustin Larson. Larson opened his mouth right away then paused while he thought more in depth. He said he wanted to improve himself, not only physically but mentally. He explained that this was a mental battle to be at peace with yourself.

At the end of their session, the students sat in a straight line in front of their sensei with their eyes closed, breathing deeply. When they opened their eyes they recited the guidelines they strive to live by: seek perfection of character, be faithful, endeavor to excel, respect others and refrain from impulsive behavior. As they recited this, Batchelor looked out at her students with pride.

Shelby Johnson is the features editor for The Dakota Student. She can be reached at [email protected]