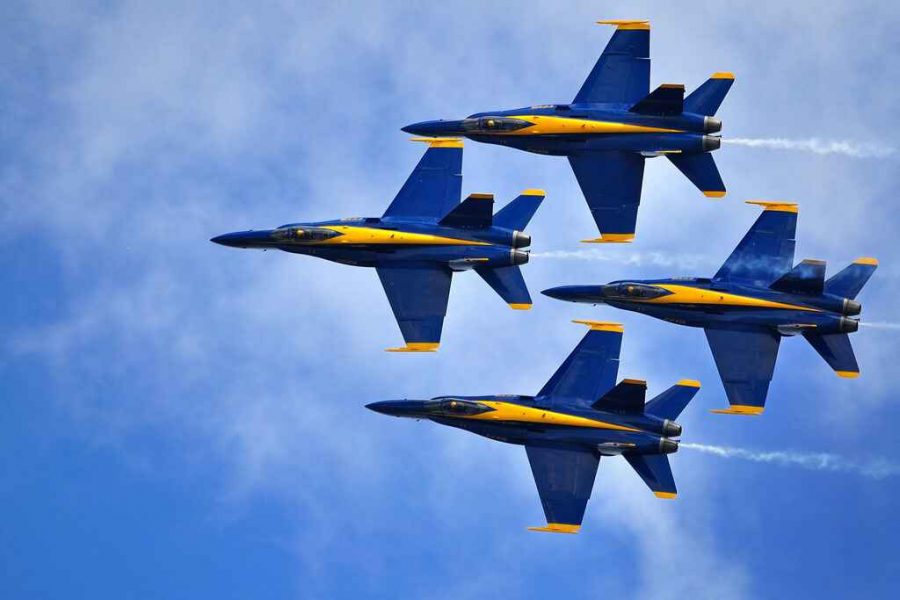 F-18 Hornets like the Blue Angels have excellent maneuverability and are commonly seen doing aerobatics during air shows. Photo courtesy of librestock.com

For two hours on August 22nd during a beautiful summer evening, I was at perhaps the busiest airport in all of North Dakota, Hillsboro, with people from all across the state, to celebrate their passion of aviation together. Throughout the contest dozens of people were in attendance from parents around Hillsboro with their children, to college students of UND, and elders of the community; former war veterans farmers.

Driving in, you could hear the sounds of propellers as many planes flew overhead, showing off maneuvers in the sky.

The main purpose of the gathering was not only for the aviators was not only to enjoy the comradery of the flight community, but also a friendly contest between them, to see who on that day was able to land closest to a thin line of chalk placed on the runway, with  both cash prizes and bragging rights on the line for the whole rest of the year. The entire contest was almost non-stop action, with planes of all different designs and sizes landing constantly, but the most notable approach was when three planes appeared to fly in formation around the entire airport before each sequentially landing. The winner of the contest, was UND alumni, Heather Sorum, who landed in her plane Lucky Lady, directly on the line itself. In addition to the contest, there was plenty of opportunities to appreciate the beauty of the aircrafts, whether it be a Green and White UND themed aircraft,  a multi-engine, or a classic plane from the 1950’s, planes of the past, present and future of aviation were fully on display.

As the contest wound down, I was given the opportunity to sit down and talk a little bit with the owner of sponsoring company Northern Aero, Carson Pedigo. Pedigo a UND alumni himself, stated that for him the principle goal was to give back to the community which had both given him his love for aviation, and the ability to be financially successful while living his dream. According to Pedigo “Aviation for me is more than a career it is a way of life. It brings people closer to family, it helps the world become more connected.”

Meanwhile according to the community Carson has been a godsend, not only providing a needed service but also always willing to go above and beyond the call of duty, such as when he personally helped two travelers finish their North Dakota passport to aviation after their plane failed and needed repairs at his shop. It was clear, the Carson embodied exactly what the UND flight program hopes to inspire its students to become, not only great aviators, but leaders who become the heads of their communities, enabling the hobby and forging future generations of aviators.

All in all, it was the perfect close to a summer vacation for a student, and a phenomenal experience for anyone considering joining a field which has given so many people, not only a career but a hobby for life, aviation.

Dave Owen is the news editor for The Dakota Student. He can be reached at [email protected]