Around campus: President who? 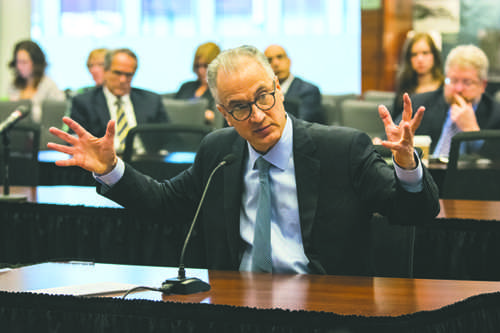 On March 15, the State Board of Higher Education named Mark Kennedy as the next president of UND, but this announcement has apparently not been heard by many.

The Dakota Student interviewed 40 students around campus, asking them their opinions on Kennedy, the selection process and the value they place on the role of UND president.

Out of these 40 students, 95 percent of students could not name the president slated to replace Interim President Ed Schafer.

When asked what they attributed this lack of information to, 10 of the 38 cited a lack of value this information has for them, while 30 students said that there is value in knowing who the UND president is.

“As an outgoing senior, I may not be as involved as I should be.,”  Arthur Ostman III, a UND senior in the business department said. “These changes don’t have as much of an effect on someone like me as they would an incoming freshman, so I just don’t have very much motivation to look into it.”

Most other seniors interviewed shared this sentiment. Disillusionment with the UND administration was also a common theme among those who were surveyed.

“I should care more than I do,” Joey Iverson, a second year student in the Communications program said, “but at the same time, I don’t think anybody knows what’s going on. I bet we got emails about it, and I also bet 95 percent of students deleted them.”

Iverson was unaware that his guess was statistically accurate before the interview, and went on to critique the methods of communication used by the school, citing a lack of strong social media presence and transparent information made easily available to students.

All other students surveyed felt the same way about the universities methods of disseminating information, specifically pertaining to the UND presidential race.

“The school should have publicized it more,” Benjamin Harris, a third year in the UND Education Department said in regards to the presidential race, “I walked right past the doors of the union every day and never knew. There weren’t be a posters on that windows or anything. I never knew.”

None of the students surveyed had attended or been made aware of the listening session held in the Memorial Union for each candidate. Another uniform trend in all students surveyed, was the feeling that their voices were not heard in the election process.

“I think they need to have more student involvement in the election process,” Iverson said. “If people don’t know who the candidates are, how can they determine who they support?”

Many felt as if their participation in the presidential search process would have no impact on the final outcome, and that the process was very closed off.

“Look at the music therapy department. Nobody got any say in that, it seems like nobody wanted that to go but is still is. That’s why people don’t read their emails,” Harris said.

These statistics do not represent a negative public opinion regarding the incoming UND president, only the process through which we have acquired him.

David Satre is the news editor for The Dakota Student. He can be reached at [email protected]