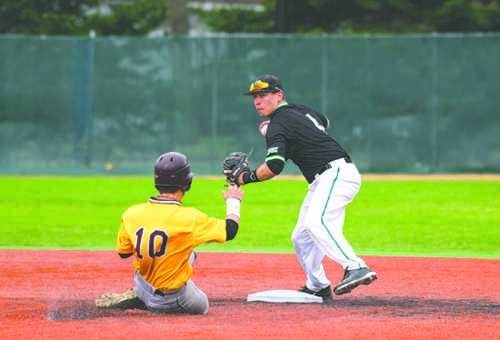 For the first time since UND announced the baseball program would be cut from the budget, the team collected a win and snapped a seven-game losing streak.

In a mid-week match up, the Fighting Hawks faced Minnesota Crookston at home in a tight game up until the final at bat where UND took the game 10-9.

Minnesota Crookston has excelled under the helm of head coach Steve Gust. The team is currently playing their best season in program history with a 22-14 record.

“Tip your hat to Steve Gust and Crookston,” UND coach Jeff Dodson said. “Those guys are so much better than they have been in the past and those guys compete hard. That was really great to see a good and competitive ball game.”

The Fighting Hawks started out strong, taking a quick 4-0 lead after two innings. But it didn’t take long for UMC to take over the lead as freshman Riley Thompson, who had three hits on the day, tripled and scored in the third, accounting for three runs.

By the bottom of the sixth inning and four pitchers later, UND had allowed the Golden Eagles to gain a 9-4 lead on 10 hits.

UMC’s offensive production would cease when the Hawks’ fifth pitcher took the mound.

Junior right-handed pitcher Zach Finley took the helm as a reliever in the sixth inning to shut down Crookston. As the UND offense started to produce, he remained on the mound for the seventh and took the batters out in order, making for a 1-2-3 eighth inning. This allowed for Ellery Bresnahan to collect the win with his contribution in the ninth.

“They jumped out and put up eight runs in two innings in the middle of the game. I thought our guys did a good job,” Dodson said.  “Zach finally came in and settled things down for us on the mound, and Ellery came in and threw really well for us in the end to give us a chance.”

But the Fighting Hawks did not give up, as they rallied for five runs at the bottom of the seventh inning to tie up the game at 9-9. UND first baseman Brett Harrison started the rally, hitting a three-run double in the seventh inning.

“It was a good thing for our club to get ready for a huge series against Northern Colorado,” Dodson said.

Notable offensive contributors included Hunter Walsh, Miles Lewis and Ben Reznicek. Walsh and Lewis each had two hits with a pair of RBIs, while Reznicek accounted for three runs, an RBI and two stolen bases.

“It was nice to get a win and get the wheels rolling,” UND catcher Hayden May said. “Hopefully, it’ll continue into this weekend against Northern Colorado.”

The Fighting Hawks currently sit at 3-12 in the Western Athletic Conference as the game against Crookston was a nonconference affair. The Hawks will head back into conference play today in a three game series against Northern Colorado, who sit at 4-7 in WAC play.

UND is in the midst of a nine-game homestand where it has gone 1-3. The team will head back on the road after a game against in-state rival NDSU on May 4 at Kraft Field.

Allyson Bento is a staff writer for The Dakota Student. She can be reached at [email protected]