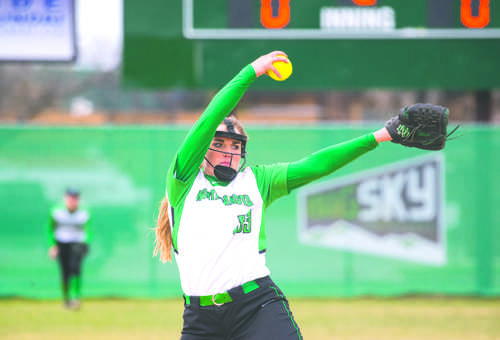 What appeared to be a slow start to another series at home ended in a series win for the Fighting Hawks’ softball team this weekend.

UND hosted the University of Northern Colorado over the weekend in a crucial conference match up and managed to claim the series after dropping game one, 6-4.

After a silent first couple of innings in game one, both teams made it on the board in the fourth inning. The Bears managed to keep the ball rolling as they led UND 4-1 heading into the final inning.

North Dakota managed to start a seventh inning rally, but the Bears shut them down before UND could cut into their lead. UNC’s starting pitcher Jayme Reddacliff was on top of her game as UND fell 6-4.

Both teams fought until the end in game two, as an unexpected turn of events saw UND take the game in a very late push. The Fighting Hawks held a 2-0 lead over the Bears heading into the fifth. Unfortunately UND pitcher Hannah Bergh gave up three runs in the fifth inning to put UNC back in the lead 3-2.

After allowing another single in the top of the seventh, Bergh would be benched for the day. Kaylin VanDomelen, who threw in the first game of the day, took the mound to close out the final inning. VanDomelen managed to snag the win with two strikeouts and no additional runs.

With a single from freshmen Mary Martin, UND managed to score two runs to tie up the game. As UND’s runner collided with the catcher at home plate, the ball rolled away and Shelby Hard sprinted home from third to give UND the 5-4 walk-off win.

A needed win indeed, as UND now sits in the sixth spot in their conference.

“The fight in our team was great. We came out and we played well and got an early lead,” Stevens said. “We were able to come back and hold on and the comeback in the final inning was nice to see but tomorrow we have to take good swings and good pitches and make adjustments early and keep them off the board and silence their bats.”

Silence is just what they did, as the series finale saw a huge momentum shift for UND as the Hawks were able to stun UNC’s starting pitcher, Jayme Reddacliff, who in the previous day posed as a serious threat.

“Big win for us to get the series win,” Stevens said. “We had a good aggressive approach we took a lot of good swings at her. We were able to knock her out of the game, which is big.”

Reddacliff only saw three innings and gave up nine hits to UND. UNC sent in Lauren Paige to lessen the gap, but the damage was already done.

VanDomelen contributed two runs and an RBI and pitched a complete game. UND’s ace only allowed a single run as the Hawks would take the game 7-1 in the final.

North Dakota heads into a nonconference matchup against Omaha on the road, Tuesday, April 19. The first pitch of the doubleheader is scheduled for 2 p.m.