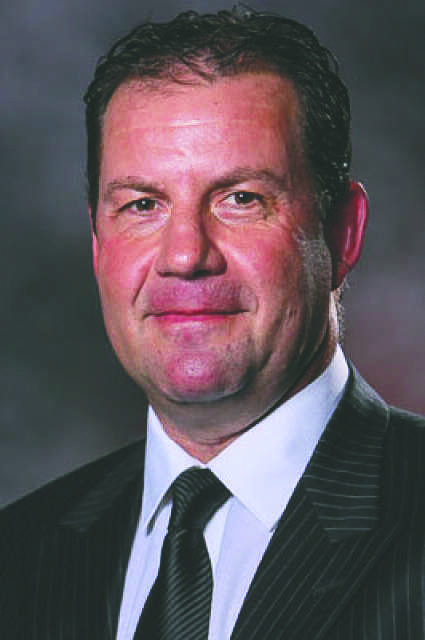 Brad Berry won the Herb Brooks’ NCHC Coach of the Year in his first season as head coach of the men’s hockey team. Photo by UND

The awards continue to pour in for the UND men’s hockey team. UND coach Brad Berry has won the Herb Brook’s NCHC coach of the year. Berry replaced Dave Hakstol this year after the latter accepted the head coaching position for the Philadelphia Flyers. Hakstol won the same award last year which means this is the second consecutive year a UND coach has won the award.

In his first year at the helm, Berry has guided the Fighting Hawks to a nation-leading 30 wins and a 19-4-1 conference record. This success has led to UND’s second straight Penrose Cup as NCHC regular-season champion. Berry’s 28 regular season victories is a new record for first-year UND head coaches.

In addition, Brock Boeser was named the NCHC Rookie of the Year and also received the NCHC’s new Three Stars Award. Boeser lead the NCHC in both points and goals. His 35 points and 20 goals during conference play are now new NCHC records. Boeser is the first UND freshman to lead the conference in both categories, NCHC or WCHA.
Throughout the season, Boeser was a four-time NCHC Rookie of the Week and one-time NCHC Offensive Player of the Week. Boeser was also named to the All-NCHC First Team and All-NCHC Rookie Team. In 36 games, Boeser collected 25 goals, becoming the sixth UND freshman to reach 25 or more goals in a season.

Nick Sallen is the opinion editor for The Dakota Student. He can be reached at [email protected]