Men’s hockey one win away from Penrose Cup 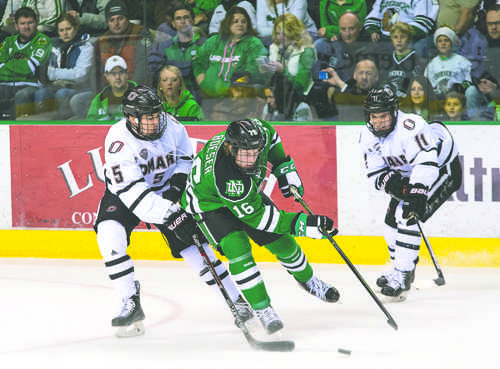 The Fighting Hawks men’s hockey team swept their matchup this weekend against the University of Nebraska-Omaha at the newly-opened Baxter Arena in Omaha, Neb.

With the sweep, UND claims at least a share of the regular season NCHC championship. With a win next weekend, they will gain sole possession of the Penrose Cup. This is the 17th regular season championship for the Fighting Hawks, which is the most in the country.

On Friday night, the UNO Mavericks started off strong on defense. They stopped the Hawks from scoring for the first period, not letting any pucks through their net.

In the second, UND struck twice on goals by defenseman Tucker Poolman and forward Luke Johnson. UND goalie Cam Johnson stood tall and held the Mavericks at one goal to make the score 2-1 when the buzzer sounded to end the period.

Not even a minute into the third period, Hawks forward Drake Caggiula found the back of the net to make the score 3-1. UNO’s Fredrik Olofsson scored several minutes later to tighten the game to 3-2, but Brock Boeser ended any hope of a comeback with an empty-net goal with a minute left.

With defenseman Troy Stecher serving a one game suspension, UND had to rely on their other defensemen to fill the big shoes he left.

“I thought our young defensemen did a pretty good job in a tough environment, playing against a good team,” Berry said.

While Friday may have been a struggle, Saturday night’s game was all UND. With Stecher back, the Fighting Hawks gave up only one goal all night.

In the first, defenseman Keaton Thompson opened up the scoring on a shot that connected from the circle. It was his second goal of the season.

Caggiula scored about six minutes into the second period on yet another highlight reel shot. UNO’s goalie let the puck pop into the air and Caggiula hit a “homerun,” batting the puck out of the air with his stick and into the net.

Bryn Chyzyk added his tenth goal of the season late in the second period to join teammates Caggiula and Boeser as the only Fighting Hawks to reach double-digit goals on the season.

UNO scored its only goal of the night four minutes after Chyzyk’s goal.

This was the first time since early 2013 that UND has swept UNO.

With St. Cloud State University getting upset and swept by in-state rival University of Minnesota-Duluth, it opened the door for UND to win sole possession of the regular season crown.

The Fighting Hawks will play at home against Western Michigan next weekend. The team only needs one victory to have sole possession of the Penrose Cup.

“We’ve got a share now, but we don’t want to share that thing,” Chyzyk said. “After we enjoy this one, we’ve got to start getting ready for Western Michigan and clinch that thing outright.”

“Definitely excited about getting at least a share of the trophy,” Simonson said. “But come Monday, we’re going to be focused on making sure we have a good weekend against Western Michigan and get to keep the trophy outright.”

The Fighting Hawks have their last regular season matchup next weekend. Friday’s game will start at 8 p.m. and Saturday will be at the regular 7:07 p.m. puck drop time.

Adam Gunderman is a sports writer for The Dakota Student. He can be reached at [email protected]