Hawks Embarrass Huskies for a shot at the Gophers 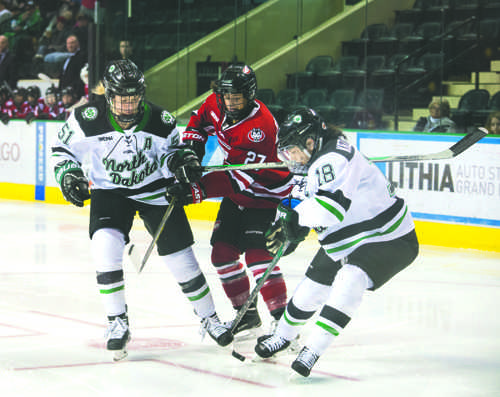 Stacking up a total of 12 goals against St. Cloud State, the UND women’s hockey team eliminated the Huskies in its first playoff series to earn a spot in the WCHA Final Face-Off.

UND forward Amy Menke continued to show why she is one of the leaders for the Hawks. The junior led the team with seven points, but she wasn’t the only one on her line that was dominating the box score. Menke’s fellow linemates Becca Kohler and Meghan Dufault collected six and five points respectively.

Game one started with a top-shelf goal from UND forward Layla Marvin in the opening minutes of the first period, assisted by freshman Charly Dahlquist.

The Kohler-Menke-Dufault line lit up the Huskies’ defense with two goals in under eight minutes into the second period. Dufault scored UND’s second goal of the game and Kohler followed suit 18 seconds later to push the Hawks ahead 3-0. Senior Sam LaShomb notched her third goal of the season from a smooth setup by the freshman pair of Anna Kilponen and Dahlquist.

The Fighting Hawks offense wasn’t the only thing clicking. Their defense played one of their best games of the season by keeping the Huskies off the scoreboard. UND also worked strategically to prevent power play opportunities for the Huskies. The period ended as UND captain Halli Krzyzaniak snagged another goal for a 5-0 lead heading into the third.

St. Cloud finally found a way to slow down the UND offensive juggernaut in the third period. UND took its only penalty of the game, which allowed St. Cloud’s Brittney Anderson to score a goal for the Huskies and tarnish the near shutout for UND goalie Shelby Amsley-Benzie.

With a final goal from Menke, UND took game one in a 6-1 final.

“I think our passion buckets were full today,” Menke said.  “We came out there flying.”

The 6-1 throttling of this St. Cloud team was a very different result from the previous meeting between the two rivals. The Hawks split the series against the Huskies last time these two teams met.

“Especially from the last series with St. Cloud, we knew we had more in us,” Menke said. “I think they also knew they didn’t want to take us in playoffs because we’re an animal in playoffs.”

In true animal style, UND knew it had an opportunity to close out this series in two games and it did not let that chance pass by. The Hawks again routed St. Cloud out of the building, throttling them 6 to 1 for the second night in a row.

UND jumped on the board 2-0 early in the first, but the similarities stop there. Dufault took a holding penalty in the second that allowed the Huskies’ Vanessa Spataro to cut the lead in half.

But the noise would begin again in the third, when UND relit its fire and scored four goals to solidify the series. Menke tallied two goals and Dahlquist capped the game with her first goal of the season on an empty netter.

Dahlquist showed her team, coaches and fans that the team will be in good hands when the seniors eventually leave. The freshman scored her first WCHA goal, collected two assists and earned the third star of the game.

“Dahlquist has been terrific for us, I was super excited for her to get a goal,” UND coach Brian Idalski said. “Empty netter or otherwise, that was pretty special. She’s a good kid.”

North Dakota heads into the next round to face the Minnesota Gophers in Minneapolis, Minn., March 5. The puck drops at 5 p.m.