UND baseball off to a hot start and a promising season 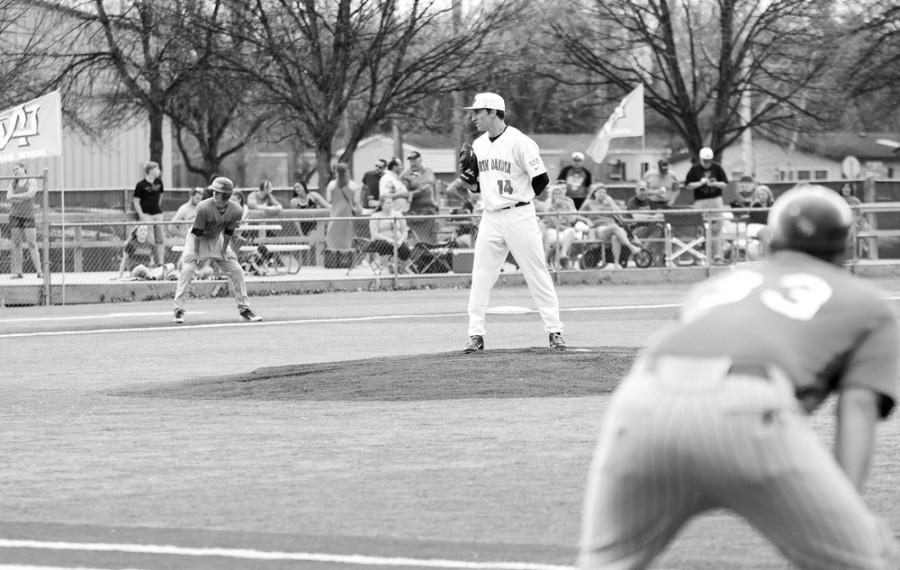 After losing 12 seniors, coach Jeff Dodson has assembled a roster of young and old to make waves in the WAC

Working on his eighth season with North Dakota, UND baseball coach Jeff Dodson has already been stunned by the early season performance by the team.

North Dakota said goodbye to 12 seniors last season, including three players who have signed pro deals since. The Colorado Rockies drafted shortstop Tyler Follis, while infielder Jeff Campbell and pitcher Andrew Thome signed after the draft with the Atlanta Braves and the Houston Astros, respectively.

With many spots to fill, Dodson collected a group of nine freshmen and three transferred juniors to piece together the current roster.  All three juniors, McKay McNair, Luke Hansen and Zach Finley fill up the bullpen as right-handed pitchers, including the other four freshmen pitchers in Riley Pelishchek, Drew Sannes, Jack Collins and Connor Trygstad.

The freshmen are also filling in the gap left from the graduating outfield, including St. Paul native D’Anthony Beckman and fellow Minnesotan Tyler Berg.

The Fighting Hawks have already claimed a series win last weekend after winning two of three from the previously No. 12 ranked University of Southern California. Since then the team’s exposure has raised to a national platform. For the first time in program history, UND has earned votes in the National College Baseball Writers Association Division I poll.

“I’m really proud of how our kids have handled everything,” Dodson said. “Before practice, we had a 10-minute meeting to make sure we stay grounded. We have a level-headed group. This group is mentally tough. We had to go after those kinds of kids this year because of the 12 guys we lost from last year’s team.”

Thanks to the stellar opening performance put on by junior left-handed pitcher Zach Muckenhirn, the junior won the Western Athletic Conference and NCBWA Pitcher of the Week. Muckenhirn was also featured as the National Player of the Week by “Collegiate Baseball News.”

The Fighting Hawks are already off the a better start this season as Dodson looks to make waves in the WAC compared to the last few years of dwelling in the middle of the conference.

Rewind to the beginning of last year where UND started 1-8 and did not get its second win until early March. For all their struggles, the Fighting Hawks were still able to salvage a 16-11 record in the WAC, but were bounced by Sacramento State after three games in the WAC Tournament.

Looking at this season and heading back home, Dodson, an Alabama native, looks to keep this new energy going.

“Bama is a beast of a different nature,” Dodson said. “Those SEC teams, they’re really good.”

Dodson knows well enough that what happened in Los Angeles was not something common for the UND team.

“The last week is really unheard of for us,” Dodson said. “But it’s just a step. We’re not going to get there overnight. But if we keep taking steps like this, we’ll be able to do something in the future.”

UND will play the next 18 games on the road, returning for the home opener in at the Kraft Memorial Field while hosting WAC team Seattle on April 8.