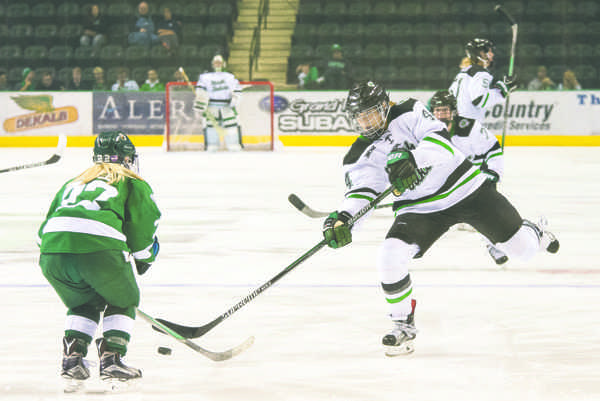 UND forward Rebekah Kolstad lines up a shot in a game against Bemidji State this season. Photo by Nick Nelson/ The Dakota Student

Finding it difficult to get the puck rolling again, UND split the weekend series with St. Cloud State.

The possibility for a new winning streak looked good after Friday’s shutout win but the Huskies managed to claw their way back Saturday as the game ended in a tie with St. Cloud, who grabbed the extra point in the shootout.

The weekend scores put the Green and White at 5-1-2 on the season.

Starting with a clean slate after brushing off the previous weekend loss, UND came out and played a solid defensive game, allowing only six shots on goal, which were all denied by Senior goal tender, Shelby Amlsey-Benzie, who picked up her second shutout of the season.

“I thought we defended well, I thought we did a nice job with back pressure and sticks and clogging lanes and not giving up a whole lot of shots, I was pleased with that,” UND coach Brian Idalski said. “Offensively, we did some nice things, overall it’s a good road win.”

St. Cloud’s goalie Katie Fitzgerald put in a serious effort by denying UND’s 33 shots but the Green and White managed to get on the board first with a redirection from the captain Halli Krzyzaniak to Layla Marvin, who tipped it in past the the goalie’s legs, netting her third goal this season.

The second period brought on UND’s first penalty shot of the season. Senior forward Meghan Dufault was tripped on a breakaway that awarded the penalty shot. Her attempt hit off the crossbar and went in as she netted her fourth goal of the season.

To seal the deal in the final minutes of play, the Huskies pulled Fitzgerald for an extra skater. UND capitalized on the empty net, as Gracen Hirschy stole the puck away in the offensive zone and shot the puck into the empty net to claim the 3-0 victory for UND.

The high of Fridays win was quickly diminished, as the Green and White played a game of catch-up on Saturday.

The Huskies struck first and kept UND on its toes for a majority of the game. St. Cloud State’s forward Molli Illikainen claimed three of the four goals against UND and set the tone for the Huskies. UND played an offensively strong game with 42 shots on goal, but it was not until the third period that their persistence paid off. Trailing the Huskies 4-1 with under eight minutes left in the third, North Dakota opted for the extra attacker. With no immediate results, UND finally managed to pick up the momentum as Amy Menke stormed the net, jamming one past Fitzgerald to cut the deficit to 4-2.

Under a minute later, with Layla Marvin taking her place at the Huskie’s net, she was able to redirect a shot from Samantha Hanson and slid it past Fitzgerald from the top of the crease to further cut into the Huskies lead, 4-3.

Keeping with the empty net and extra attacker, UND faced close empty goals, as St. Cloud was able to slide the puck into their zone three times, all of which missed the net which kept the hope alive for the Green and White.

In the final seconds of regulation time, Shannon Kaiser threw a shot towards the net and Menke got her stick on the shot and redirected it into the top of the net to tie the game in an amazing comeback attempt and force overtime.

Neither teams were able to produce any further goals in overtime, which gave each team one for their tie column. St. Cloud took the extra point after the shootout went four rounds and Payge Pena was the only player to find the net.

Coming back for the first home series, North Dakota will host Minnesota in on Thursday-Friday, Oct. 29-30. Both games are set to begin at 7:07 pm and Friday’s game will be UND’s annual Pack The Ralph Contest.