Local captain skating to be the best 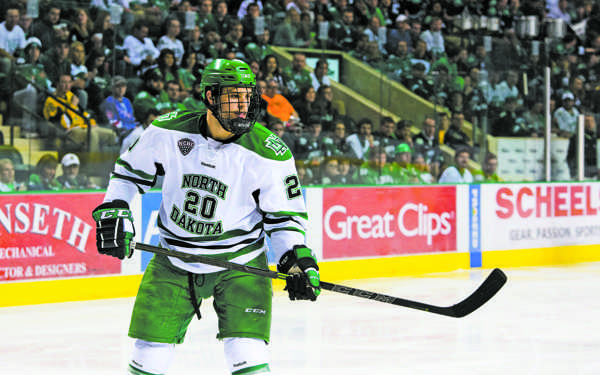 Gage Ausmus leads a group of promising youngsters into the season. Photo by Nick Nelson/ The Dakota Student

It’s been a fairly hot start for the UND men’s hockey team as it begins the quest for the eighth banner.

Despite coming away with a win and a draw from the Ice Breaker Tournament, the Green and White brought home the first place trophy — the first in the program’s history.

“It’s a good feeling,”  captain Gage Ausmus said. “Good to get the first few games out of the way, got positive feelings to start the season.”

Ausmus is already showing his worth as captain of the Green and White. Through two games, Ausmus has one assist, three blocked shots and leads the team at +4 in plus/minus.

The junior from East Grand Forks looks forward to being the captain of the hometown team, though he never expected it.

“To be honest, my goals weren’t that high. I had always dreamed of playing for the Sioux so to accomplish that and to be named captain is great,” Ausmus said. “I found out in late June. I was working at a hockey camp in St. Cloud and got the call from coach Brad Berry. It was a great moment.”

Being the captain, Ausmus is expected to show underclassmen the ropes of what it takes to play for the Green and White. It seems as though Ausmus has done a good job with the freshman class thus far as he is providing a spark to the team as freshmen players Shane Gersich and Chris Wilkie notched their first career goals last weekend.

But if you ask Ausmus, the freshmen’s production comes as no surprise.

“It’s what is expected of them,” Ausmus said. “People were worried about last year losing a good group of guys and with these young guys coming in. Here, you’re expected to be ready to play and to contribute.”

Along with a new group of freshmen coming in, there is also a new coach leading the charge for the team.

Over the summer, Berry was named UND’s next coach after Dave Hakstol left for Philadelphia to coach the Flyers.

After nine seasons as UND’s assistant coach, the difference between Berry and Hakstol isn’t night and day.

“He’s positive. If he sees something you do something right in practice, he’ll let you know,”  Ausmus said. “But at the same time he’s very intense. Just as much as Hakstol.”

Ausmus and Berry look to be part of something great at UND, as the bar is set for one of the most successful college hockey programs.

UND will continue the season with a home-and-home series against former WCHA rivals Bemidji State. The Beavers will host Friday while the Ralph will be rocking on Saturday for the first regular season game of the campaign.

For UND and its captain, there’s no different preparation for these games. Nothing is different except for amount of games at each venue.

“We’re prepping for a road series now. We want to go in there and play smart and hard,” Ausmus said. “Then at home we’ll play just like it’s another home series.”

Ausmus and the rest of the Green and White start their first home game at 7 p.m. this Saturday in the Ralph Engelstad Arena.

Jack Harvey is a sports writer for The Dakota Student. He can be reached at [email protected]