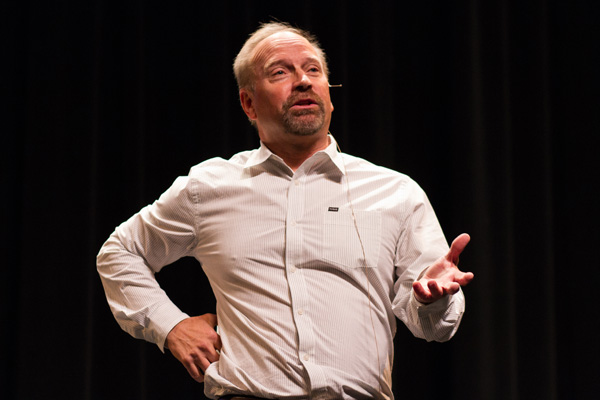 Randy Olson gives a speech at the University of Missouri. Photo courtesy of wikipedia.org

Hermes is the Greek God of messages. His responsibility is to be the bridge of communication between mortals and the Gods of Olympia.

Randy Olson wrote in his book “Don’t Be Such A Scientist” about the balance between substance and style.

As a science communicator, I need to find a way to bridge the gap (like Hermes does) between scientists’ research and public understanding. My duty is to teach what scientists are doing in an engaging way to the public.

In order to accomplish my goal, I need to clarify the research being done with enough charisma to entertain my audience. The only way I can do this is by composing an interesting narrative.

Substance is objective, factual and well thought out. Scientists use these traits in their own work and in their daily lives. Science values complex ideas (sometimes known as jargon or tech-speak) while creativity is suppressed.

Scientists often embody the traits that make good science. It makes sense, as scientists are taught early on in their careers to live inside their head, to be skeptical and to remove emotion from their larger purpose.

Communicators, on the other hand, don’t care as much about the facts. The focus is not on substance, but rather on how the information is conveyed.

Let’s call how the facts are presented “style.” Good communicators are charismatic, funny, upbeat and entertaining. They are willing to hype something up for the sake of triggering emotion.

The focus of a communicator is away from the brain and more in the heart.

Comedy movies are renown for having all style without substance. Made purely for entertainment, comedies usually don’t have a take home message. The plot of these movies is easily forgettable because of the lack of substance.

What is remembered are the jokes. Humor is a great way of bolstering the style of your message, because it keeps the audience engaged.

What I didn’t know until recently is just how similar a science paper and movies are. They both share the same three act pattern.

Science papers have an introduction, methods, results and discussion. In Hollywood, the pattern is often called the setup, conflict and resolution.

The introduction of a paper is the setup of a movie. Style is the main driving force at the start. It’s all about hooking the audience to buy into the plot.

The conflict in a movie is equal to the methods and results section of a paper. This is where all the action happens. Substance is key here. If there is nothing tangible for the audience to think about, the interest that was set by the introduction will be lost.

The resolution of any movie is equal to the discussion of a science paper. Again, style is important here. The goal of a conclusion is to facilitate an on-going discussion and leave the audience with a take home message. Communicating with Hollywood movies or MIT science papers is not so different after all.

It’s hard to be rational in Hollywood, just as it’s bad practice to take creative license in science. However, when you learn how to balance substance with style, thinking with feeling and judging with perceiving, you can communicate your message in an educational and entertaining way.

Good science communication is the combination of both elements — substance and style. Without style, you’re a dictionary. Without substance, you’re as elusive as a shimmering pond in the morning fog.

I’d rather be a solid science paper with funny punch lines, or a comedy that leaves the viewer with a lesson to ponder.

Nick Sallen is the opinion editor for The Dakota Student. He can be reached at [email protected]