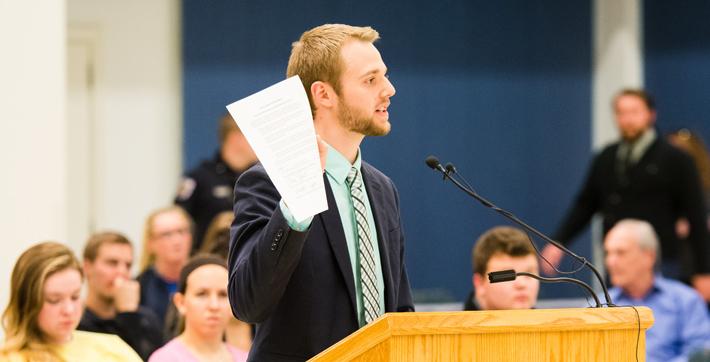 A resolution on a vote of no confidence for four administrators was tabled indefinitely at the latest UND Student Senate meeting on April 22, meaning no further action will be taken on it.

The decision to table came almost a week after a special senate meeting was held to discuss tuition models and the perceived lack of transparency between the administration and students. Hundreds of people attended the first meeting, which lasted about four hours.

The second meeting was quicker, with a limited amount of discussion from the public and student senators on the resolutions in front of them.

“There was very constructive conversation, and faults were mentioned on both sides of the aisle,” Franklin said. “I would like to commend the President and his cabinet on his work on these issues to ensure that students are always the No. 1 priority at the University of North Dakota.”

All four administrators who were mentioned in the resolution on a vote of no confidence — Kelley, Provost Tom DiLorenzo, Vice President for Finance and Operations Alice Brekke and Vice President for Student Affairs Lori Reesor — were all in attendance at the meeting.

“This has been quite a few days of learning and teaching for all of us,” Kelley said. “This is exactly an appropriate conversation to be having. We share many of your concerns about tuition increases and more importantly about the need to improve our communication. There is much more work that we can do.”

Brekke spoke about the confusion over tuition models and promised to work harder in the future to make things clear for students. She also said she plans to talk to the State Board of Higher Education to make sure there is time for all parties to have a say in the process.

1) Effective immediately, UND administrators and Student Government leaders agree to work together to achieve a higher level of involvement and partnership between the two groups.

2) UND will create a Tuition Model Task Force made up of both students and administrators.  The task force will discuss and have input on potential tuition models going forward.

Also introduced at the meeting was a resolution which calls for a neutral third-party group to review how information regarding tuition models was distributed to students and the public.

“I think we need to take this incident and learn from it,” Kopp said. “As a student government, as an administration and as an institution.”