Elephants, performers and poodles, oh my! 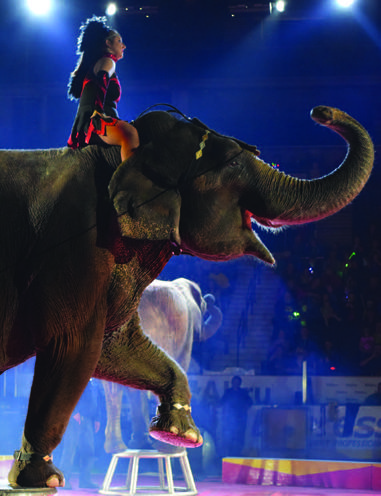 Each year the Kem Shrine Circus comes to town, and each year hundreds of Grand Forks residents come rushing to the Ralph Engelstad Arena to watch the elephants, acrobats and the famous Globe of Death.
The Kem Shriners is the Grand Forks chapter of the Shriners International fraternity. The organization’s webpage states “Shriners International is a fraternity based on fun, fellowship and the Masonic principles of brotherly love, truth and relief.”
The group brings the circus to Minot, Williston and Grand Forks each year.
Shriner and circus security guard Rodney Frederick has been working with the Kem Shrine Circus consecutively for the past five years and loves the organization.
Frederick said he can’t choose a favorite act. “They’re all good,” he said.
Bengal Tigers
Ringmaster Justin opened this year’s  opening act with an enthusiastic introduction of the dangerous beasts of the jungle, bengal tigers and assistant Brian Franzen.
The opening act contained multiple tigers,maneuvering their way through hoops and obstacles within their large steel arena.
Rosaire Bears
Two European brown bears awed the audience with their tricks. Walking on hind legs, the bears ran across the floor and climbed on barrels and boxes before making their way to the top of a staircase to endure a slide.
This year’s circus was a first for Grand Forks residents Daniel and Christine Paton, and they agreed the bears were the cutest act of the night.
“It’s cute that they clap and walk on there two back feet,” Christine Paton said.
Spanish Webs
Several circus showgirls appeared out of a magical box with elegance and grace. The girls swung from the ceiling and performed acrobatics while holding on with one foot.
Comedy Display
George the Clown introduced the audience to three of his favorite toys — so the audience thought. In a twist of events, the “stuffed” elephant toy turned out to be a pinky poodle in disguise.
“The one I liked the least was the pink poodle in the elephant costume,” Daniel Paton said.
Wife Christine Paton agreed, “It was boring. They didn’t do anything too special.”
Amazing Geraldos
Two brave souls stepped on the death defying Wheel of Destiny putting audience members on the edge of their seats. The two tested the boundaries of the wheel by running in and on top of the device. The man went as far to run on top of it blindfolded.
Highwire Act
Jasmine and Jim performed stunts of balance on a single silver strand of line strung through the air. They pushed the limit of just walking and rode a bicycle across the line along with Jim carrying Jasmine on his shoulders as he staggered across the line.
Dominguez’s Furry Canines
Several poodles and other dogs maneuvered their way through tunnels and over hoops to steal away the audience with their tricks.
Performing Elephants
Three elephants entered the arena holding tails and carrying a circus showgirl as they performed tricks and pretended to sleep as they all lay down to a lullaby. One elephant performed a trick never seen in circus history before as it stood on a small ball with all four feet and balanced.
The performing elephants seemed to have been the crowd favorite, especially by 4-year-old Elijah and 2-year-old Noah Hensrud who have been returning to the circus since they were born.
“I like the elephants,” Elijah Hensrud said. He even got the opportunity to ride the elephants last year.
“We enjoy it,” Elijah and Noah’s mom Aisha Wood said. “I mean, we’ve come back for four years now.”
The Globe of Death
The Kem Shrine Circus’ final act “The Globe of Death” was the most suspenseful of the night. The act included two Thrill Riders and one brave woman who stood in the middle while the riders sped around her in a caged ball.