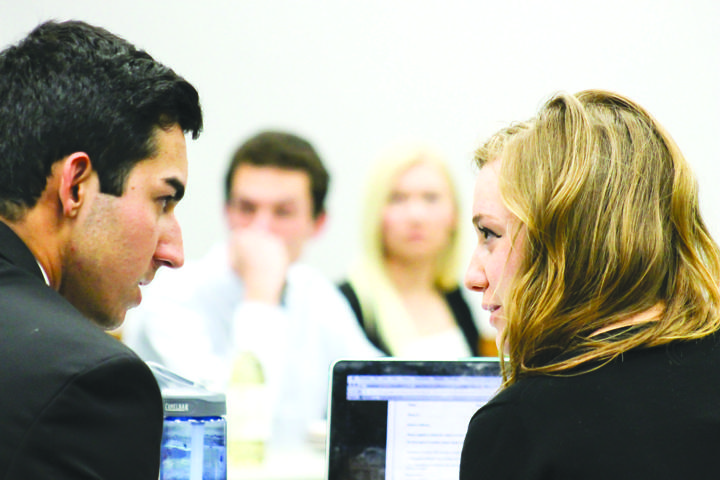 Student Government elections can create tension between parties, and a few appeals filed after Election Day, but this year more than 20 appeals were filed. Ten were filed by the Hyder-Butler campaign against the Kopp-Nelson campaign. A meeting was held at the Memorial Union on Sunday night at which the two sides made their case. The Elections Committee reviewed each appeal, and denied all except for two that were abstained.

“I think the meeting kept a respectful tone, and it was kept to the issues at hand,” Student Government President-Elect Matt Kopp said. “We were able to avoid personal attacks, and I appreciated that … All of the appeals that the Elections Committee heard were denied, and I think that proves that Taylor and I adhered to the code of elections.”

Elections Committee Chairman Blake Andert said it was an intense year for appeals. “Appeals have been filed every year, but usually not to this extent,” Andert said.

Many of the issues were pertaining to the manner in which campaigning was done; however, as most of it was based on hearsay, it was difficult for parties to provide hard evidence.

“I personally was a non-voting member, but I support the conclusions that the committee came to,” Andert said. “And they were tough decisions because there was very little concrete evidence for any appeal, mainly just hearsay matters.”

Coordinator of Student Organizations and Activities and this year’s Elections Adviser Sara Kaiser said there are many areas in the election code that aren’t very clear, which is likely the cause of many disagreements.

“I think the hearing was stressful for both sides,” Kaiser said. “I think (the elections committee) did the best they could with the information they had. “The election code is determined by student government, and so based on some of the appeals, I think there is a lot of gray area where students didn’t know, campaign sides didn’t know. Is this allowed? Is this not allowed? What’s within the rules and what’s not?” Kaiser said.

Kaiser and Andert are now working together to make recommendations for Student Government that will clarify many of these nebulous areas regarding the campaigning process, so future elections don’t get as messy.

Kopp and Nelson are both expected to take their places in office, and they will face no financial punishments as all appeals against them were denied.

“We think the issues that were brought up were important, and we were happy to have the opportunity to address them,” Kopp said.