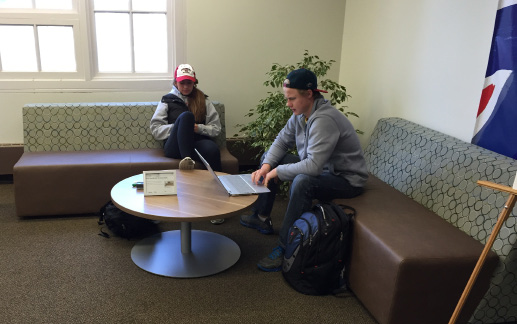 UND freshmen Lexi Anders and Luke Nelson study on a few of the new couches at the Chester Fritz Library. Photo by Marie Monson/The Dakota Student.

The UND Chester Fritz Library has a room full of new furniture students have been testing out this past week, and it will continue to be there until further notice.

The test furniture is not technically a part of the new master plan process that will kick off shortly. Head of Reference Sally Dockter said they decided to use a pool of money for these items as a starting point that will get the plan rolling.

“There was just a little chunk of money available in the library that would help us move in the direction of getting ready for this big change that we’re going to see,” Dockter said.

Students can use the various pieces of furniture, which are set up near the fish bowl on the second level, and iPads with feedback surveys, which asks questions regarding functionality, style, traffic flow and comfort, are located at each location. Most students say they are in favor of the new furniture, partly because the majority of the furniture in the library is from 1962, with the pieces in the newer addition from 1982.

“I think it’s a whole lot nicer than anything in the rest of the building,” Dockter said of the new furniture. “And we did a study of the existing furniture this past year, and what I took from it was that they need comfortable seating and it needs to have the flexibility that it can move around — they like to do that.”

Although he won’t be around to see the final changes in the library, senior Connor Jones also tested out the new designs and had mixed feelings.

“It definitely seems nice,” Senior Connor Jones said. “It’s an upgrade from the old stuff, and I like being able to spread out more. Some of the chairs are harder though.”

The library put out a bid to approximately eight different furniture companies in an attempt to find the best furniture for the best price, and it will do so again when it comes time to make a purchase on a biggerscale.

“The small pool of money things that students have asked for a while, which has nothing to do with the master plan,” Dockter said. Next week open forums and focus groups are set to meet at the library, which will be a big step in putting the master plan process in motion.

“I’m just really excited about this whole process, and that this has actually become a priority for campus, to improve the library,” Dockter said. “It’s not just the physical building, it’s the whole darn thing. It’s the collections, the services, everything needs to be looked at.”