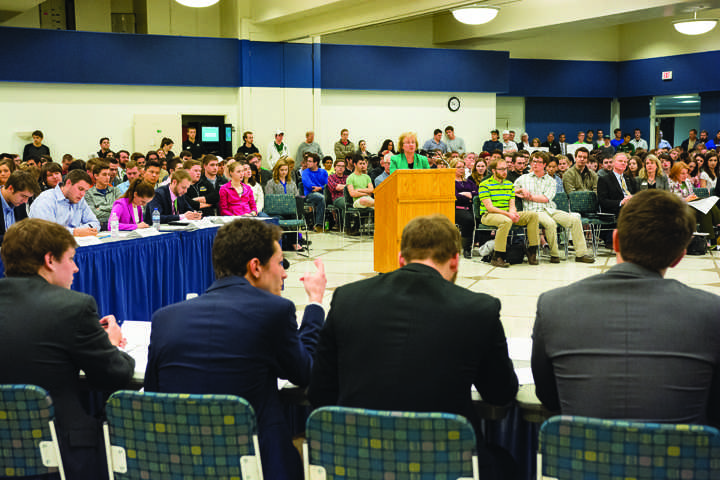 Hundreds of students, faculty, staff, alumni and community members packed the Memorial Union Ballroom on April 16 for a special Student Senate meeting to discuss tuition models and a vote of no confidence against administrators.

The meeting followed weeks of confusion over tuition models proposed to members of Student Government at the beginning of March.

After more than three hours of discussion, the senate decided to table the resolution that would call for the resignation of President Robert Kelley, Provost Thomas DiLorenzo, Vice President for Finance and Operations Alice Brekke and Vice President for Student Affairs Lori Reesor. The resolution will be discussed at a meeting rescheduled for April 22 in the Memorial Union.

Brekke, Reesor and Kelley all spoke at the meeting. According to the administrators, DiLorenzo wasn’t at the meeting due to out-of-town conflicts.

Student Body President Tanner Franklin wrote and introduced all three resolutions presented at the meeting. The final resolution dealing with a vote of no confidence generated the most discussion time.

“This was seen as a last resort to myself and other members of student leadership,” Franklin said. “This was considered a nuclear option. Mistrust is floating around the Student Government office between my office and the administration. The issue here is not about tuition models, but is about transparency.”

Franklin brought forward documentation from an open records request — which he said took almost two weeks to receive — showing that there had been numbers attached the tuition model on Mar., 9.

The tuition models proposed were in accordance with State Board of Higher Education guidelines, which included the need for the models to be revenue-neutral for the university. The administration said the proposals were meant to incentivize retention and four year graduation rates.

“It’s gravely disturbing to me how non-transparent the institution is continuing to be with its students,” Franklin said. “The administration continues to make it difficult to obtain information and make decisions that are in the best interests of students.”

Kelley and Reesor then took turns addressing the senate.

“I regret that we have reached the point where mutual trust and confidence has been damaged,” Kelley said. “Up until today, I was confident that we were succeeding in working together. My confidence has been stretched to its limit. At no point has any information been hidden from anyone.”

Kelley said the administration is also concerned about tuition rates but that there has been transparency in the whole process. He said the university has been working with the SBHE, the Chancellor and legislators.

“I’m mature enough to understand flawed communication and miscommunication,” Kelley said. “What I’m working to understand is how the leadership of our Student Senate, with whom we work daily, and serve to the best of our ability, can make the allegations contained in this resolution. In my opinion, UND’s student body has not been really effectively represented this year.”

Kelley also took the opportunity to call out Franklin for missing meetings of the President’s cabinet and declining personal invitations. Franklin was able to respond later, saying the meetings conflicted with his classes.

University Senate Chairwoman Melissa Gjjellstad and Staff Senate President Sharley Kurtz both spoke on behalf of their respective groups, saying that neither was in support of the resolution.

SBHE faculty member Janice Hoffarth was present and voiced her personal opinions. She said the UND administration is doing everything the way it was supposed to.

“I had to have somebody point out Mr. Franklin to me tonight,” Hoffarth said. “But I know the NDSU students because they come to meetings. (The resolution) is not good for this institution or the Grand Forks community.”

There were also protesters at the meeting, saying was illegal and against the by-laws of the senate.

Franklin also started an online petition to allow the public to support the vote of no confidence against the administration. The petition gained over 2,200 signatures.

Two other resolutions proposed at the meeting passed. The first was against two tuition models administration originally proposed, which would raise tuition 10.5 and 12.3 percent, respectively.

Brekke took the time during the discussion of the first resolution to state her position.

“At no time was tuition model information withheld,” Brekke said. “Before being released to the public, multiple steps must be taken. I have consistently indicated we are working on it. I have never lied about it.”

The next senate meeting will take place on Wednesday, April 22 at 7:30 p.m. in the Memorial Union Ballroom. The resolution for a vote of no confidence in administration will be discussed.