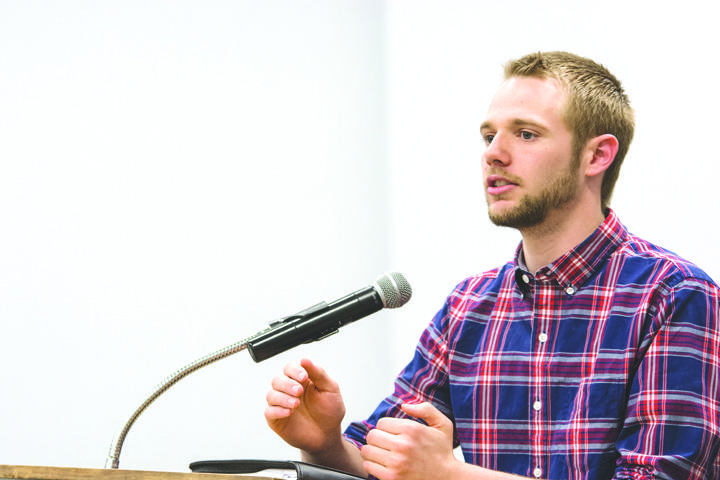 Plans for new tuition models that could significantly increase costs for students in the coming years were the hot topic at Student Senate’s April 12 meeting.

Although administrators involved in creating the models were unable to attend the meeting, student government executives took the opportunity to clarify what the models were and offer their input.

Student Body President Tanner Franklin gave Senate members a packet of information he received at a March 11 meeting, containing the three proposed models. He also voiced his concerns over what was presented.

“There’s a large lack of transparency between UND administration and students and the student government,” Franklin said. “It’s very concerning to me that there’s something to hide.”

“It was presented in a manner that was kind of secretive,” Mitzel said. “It’s an incredibly radical change from the way things have been done at UND for years.”

Franklin said there is an open records request that was initiated on April 6 for information regarding the tuition models.

“There are rumors going around that there is more information out there,” Franklin said. “I’m not confident in the leadership of UND right now. They’ve made it so difficult for students to receive information. What are they hiding? Why are they trying to hide it from the legislature?”

The first two options of the proposal would increase tuition rates by 10.5 or 12.3 percent respectively. The third option would lock in a rate of tuition for eight consecutive semesters for a student. However, no numbers were available for that plan.

“Option three is the only one that incentivizes what we’re talking about,” Sen. Matt Kopp said. “We just need to see numbers.”

Senate members are hoping to talk to administrators in the coming week to get a clearer picture of why the large increase in tuition may be necessary.

An email was sent out by Student Body Vice President Brett Johnson earlier this week about a special meeting to be held Thursday that would “include further discussion of tuition models and a vote of no confidence in UND President Kelley, Provost DiLorenzo, Vice President Reesor, and Vice President Brekke.”

The Dakota Student will report on this meeting in its next issue.