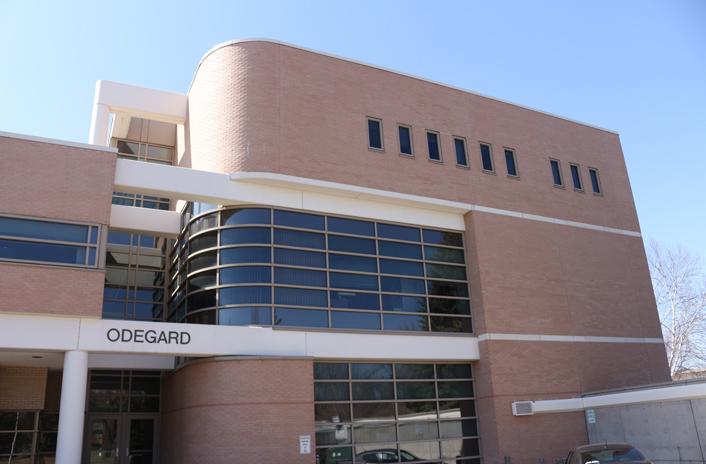 Odegard Hall, home of the School of Aerospace Sciences, which is currently in need of a new dean by June next year. Photo by Jackson Smith/The Dakota Student.

Since UND school of Aerospace Dean Bruce Smith’s retirement announcement earlier this semester, there has been a high level of apprehension on campus, especially within the various five aerospace departments.

Although Smith has promised to remain in his position for 15 months to ensure a thorough search for a replacement, several faculty, staff and students have expressed concern about the hiring process.

Smith said in his announcement email he would stay through June of next year, but because Provost Thomas DiLorenzo’s office has said in a press release it would utilize all of those 15 months, “unless the new dean assumes the position before that time,” members of the aerospace community have worried the search will be conducted too rapidly for their liking.

“I think we were just apprehensive that we would be given an interim dean that doesn’t know anything about aviation and aerospace sciences in particular and all the dimensions that we have,” aviation professor Kim Kenville said. “So I think we wanted to make sure that the president and provost knew that we want Dean Smith to stay until the retirement date he gave in his letter.”

President of the Student Aviation Advisory Council Christian Smith also worries the final decisions will be made by people who don’t fully understand the dynamics and responsibilities of the school.

“We don’t really get controled too much from that side of campus, so when we have major decisions like this, the Twamley side of campus is going to come in and do their own thing, and that really makes us nervous,” he said.

The John D. Odegaard School of Aerospace Sciences has only had a total of two deans — John D.Odegaard, who founded the school, and Bruce Smith, who took over as dean in 2000, and both men had backgrounds in business and academia.

“We’re not saying that we don’t think a good search will happen, but I do know now that the aerospace industry is kind of enjoying full employment, and so who is going to be the right person for this job?” Kenville said. “It’s a business person but it’s also someone that understands higher education and academics.”

In response to several requests, DiLorenzo met with aerospace faculty and staff last month to discuss the next steps in the process of looking for a new dean.

In the meeting, he said UND will be hiring a consulting firm to aid in the hiring process, and some staff members are unsure of whether this is a necessary step.

“My feeling on that is I’m not sure we need one, because I don’t think a higher education search firm is going to find us the person that can run our business and our academics,” Kenville said.

But DiLorenzo said the firm is necessary in order to view as many applications as possible.

“I want to hire a search firm, no question about that, because what I have found is that the dean is at the level that you really need some outside help to make sure you get as big of a pool as possible,” he said.

The search for a new dean is still in its preliminary stages — a consulting firm has yet to be decided on, and costs are thus not yet known.

According to UND Spokesman Peter Johnson, the search committee, which will be appointed by the provost later this month, will be in charge of choosing the firm. The fees will be paid for by the School of Aerospace Sciences and are usually either a percentage of the first years salary of dean or a negotiated flat fee.

Johnson firmly believes hiring a search firm will save committee members time and work and that historically the practice of hiring firms has been beneficial overall.

“A search firm has been connected to every major search that I can think of in my more than 25 years at UND,” Johnson said. “This is the best approach to finding the best applicants and promoting them to apply for the position”

“We have 15 months, and so we can have a very deliberative approach to this next search,” DiLorenzo said.

“This program has been wildly successful under Bruce Smith and John Odegaard,” committee member hopeful Christina Smith said. “We just want to continue to sustain that success into the future.”

DiLorenzo is meeting with the various five departments within the School of Aerospace during April to further address each group’s specific questions and concerns.

Chairman of the Atmospheric Sciences Department Mike Poellot voiced his opinion as well, pointing out the special circumstances of the situation.

“There aren’t very many colleges like this in the country, that have this composition, so that’s what makes it a little more nontraditional of a search process, to get someone to lead this type of group,” Poellot said.