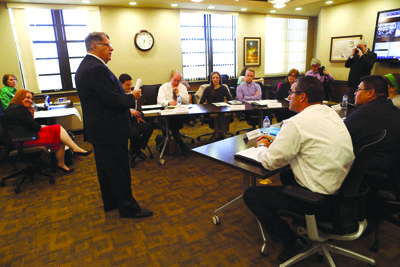 The second meeting of the UND nickname committee concluded with the committee agreeing upon a list of attributes it wants the new name to have and setting up the dates for when public submissions can begin.

The committee decided on the following four attributes for a new nickname:

2.) Promote a sense of pride, strength, fierceness and passion

3.) Be representative of the state and region in a way that honors the traditions and heritage ofthe past but also looks to the future

4.) Be a unifying and rallying symbol

The public can begin to submit ideas through the UND website starting April 1 and ending April 30th.

The form on the website will allow up to two idea submissions, with a 25 character limit each. A short 140 character explanation box will also be provided.

Submission forms will also be mailed out across the state through newspapers.

Those wishing to submit via mail must have the envelope postmarked by April 25 for the submission to be considered.

The entries will be compiled by PadillaCRT and a team led by Kelly O’Keefe, who provided counsel for the previous Nickname Task Force that led to the creation of this committee.

The initial submission presented at the beginning of the meeting didn’t have a box for an explanation, something the committee members thought was an important piece. But it also creates a longer time period for going through the submissions.

“We want to have at least a little something for an explanation,” Committee Chairman Karl Goehring said. “How much time and space are we going to allow?”

Although UND President Robert Kelley wants a short list of three names to be voted on by the public in early May, the committee felt pressed for time because of the submission process and going May through all the names.

“I think that’s really, really ambitious,” committee member Lowell Schweigert said. “It’s a very, very emotional issue, and to get emotions in check takes time. It’s going to take us some time to go through those names.”

That timeline will give the committee about 10 days in the beginning of May to go through what is expected to be hundreds of suggestions to narrow the ideas down to three.

This time was picked so the final public vote with the three names could be announced in the May edition of UND’s Alumni Review, which reaches approximately 100,000 people.

The process for the public vote has not been decided yet, but the committee plans to work on that during the month of April.

The next step of the meeting was to get a condensed list of the attributes the committee wanted the name to represent.

Those attributes would be put on the submission form for the public to consider.