Setting sail on a Boston-bound ship 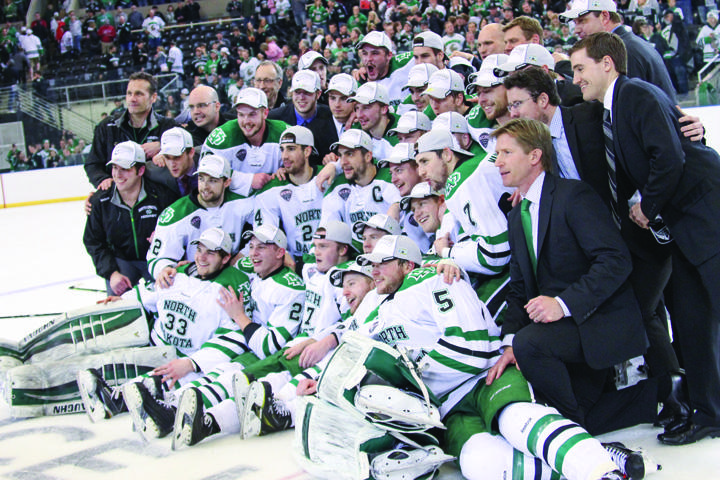 The UND men’s hockey team poses together after punching its ticket to the Frozen Four last Saturday at Scheels Arena. Photos by Jennifer Friese/The Dakota Student.

Zane McIntyre skated to the blue line before last Saturday night’s game as UND’s starting goaltender. His name had been called, but the announcer’s voice was barely audible over the 5,307 screaming fans — most of them in green — at Scheels Arena in Fargo.

It was the largest crowd the arena had ever seen.

After the game, students who had been standing for hours packed behind the net continued pounding on the glass, celebrating with the UND men’s hockey team that was Boston-bound to the Frozen Four for the second year in a row.

As the host team of the NCAA West Regional, North Dakota welcomed Quinnipiac, Michigan Tech and St. Cloud State for a chance to punch a ticket to the Frozen Four. It was the two NCHC rivals that met in the regional final last Saturday, North Dakota ultimately succeeding with a 4-1 victory over SCSU.

The clocked ticked down and the final buzzer sounded. The entire UND bench exploded and skated toward the glass behind the Hobey Baker finalist to celebrate with the students who had made the trip south to cheer on the team.

“I think when you look at the attendance rates throughout college hockey, it’s no question UND is No. 1 for a reason,” McIntyre said. “You go across the whole state, it’s UND Fighting Sioux colors and bleeding green and stuff. It’s pretty special to be a part of, not only as a player, but as a teammate for all these guys and all these coaches … It’s pretty special is all I can say. Thank you guys.”

Though the unwavering support was common all season, UND knew there were no guarantees.

“What a tremendous atmosphere for our players to have the opportunity to play in,” Hakstol said. “You’re not guaranteed anything this time of the year playing in an environment like this in your home state, because the teams are so good. Everybody that we’re playing has been in these environments before.”

It was a bit more familiar for North Dakota. The team clinched a tournament berth last season thanks to the fate of other teams’ results around the country. This season, its 29-9-3 record was enough to send it forward with more control of its own fate.

For the 21st time in school history, the Frozen Four became a reality once again.

A UND team in 15-year drought of raising another national championship banner is ready for the next stop. It’s been traveling on this road since the beginning of the season — since a rival Gopher team ended its season in the Frozen Four semifinals last season in sixth tenths of a second.

In a flash, any hope of playing the last game of the hockey season that would crown the winner was severed.

This year’s team is largely composed of the same players whose hearts dropped as the puck slid in the net in that final second.

They’re back to end this one differently.

“It feels pretty special,” McIntyre said. “Going back to last year, we knew we had a strong core of players coming back that could really push the envelope this season. Collectively as a group, it feels incredible to get back for all of our hard work throughout the year. We’ve put in a lot of work and our team has really come together. It feels pretty dang special to get back there.”

In order to get there, North Dakota’s journey wasn’t without trials.

Though the opening frame saw St. Cloud get one past McIntyre in the first few minutes, it didn’t rattle a team with confidence in its goaltender and its ability to quickly rebound.

“This group’s been through an awful lot,” Hakstol said. “Not just this season —  the bulk of this group has been together over the last two seasons. If anything, it maybe gave us a little bit of a jolt.”

The electric atmosphere might also have given a jump to the team.

Andrew Panzerella didn’t necessarily expect to be called into the lineup, yet he rose to the occasion when Keaton Thompson was unable to play due to illness.

He said his teammates made the transition simple, and his goal in the first period that equalized the teams was already written into the books beforehand, according to Panzerella.

“I think it’s always part of the plan,” he said with a smile.

And it was executed early for his second goal in the 77 games he’s played.

Though he’s not been a consistent name on the lineup sheet, Hakstol said Panzerella is a player that heavily contributes to setting the tone for the team.

“He’s not in our lineup all that much, but his work ethic, the type of teammate that he is, those are the things that set the bar,” Hakstol said. “It was not by accident that he could step into a situation like tonight and be successful. That’s not easy, especially when you haven’t been in the lineup on a consistent basis … That says all you need to know about the work that young man does.”

That’s been a staple of this team — the depth of its lineup.

The stage is set for a UND-Boston University matchup on April 9.

While North Dakota was encouraged by its loyal fan base last weekend, the tables might be turned with a Frozen Four tournament set in Boston.

Whatever the case, this team has one goal in mind.

Now two games away from a national championship, North Dakota’s tenacity was geared toward that single goal last weekend.

“We played with a purpose,” Hakstol said.

Elizabeh Erickson is the sports editor of The Dakota Student. She can be reached at [email protected]