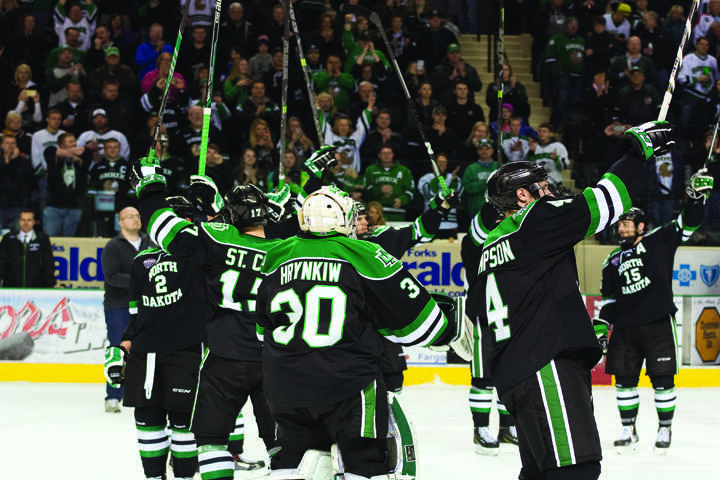 Each goal was clearly laid out. One by one, the UND men’s hockey team is attaining them — celebrating each success — but quickly setting its sights back on the path to what’s next, not letting its focus stray too far ahead.

Team members lifted the Penrose Cup last weekend, set it back down again and began preparing for the upcoming weekend against Colorado College in the NCHC Quarterfinals at Ralph Engelstad Arena. They all know what they’re working toward.

They’ve gone about each task with diligence and confidence, keeping one element constant.

“This group has prepared very well and has a good presence in our locker room. You don’t just flip that switch on or off as you go through a year. We’ve gone a through a real growing and building and developing process throughout the year. We’ve played very well and consistently over the last couple of months. We’re going to have a huge challenge in front of us.”

North Dakota is in much the same situation as it was last season, again hosting the Tigers in a best-of-three series with hopes of punching a ticket to the Frozen Faceoff tournament in Minneapolis next weekend.

For the 13th consecutive season, UND has clinched home ice for the first round of the conference playoffs and maintained the longest such streak of any team in the nation.

It took three games at home last season to eliminate the Tigers. Two might have been better, but that’s not what’s on the mind of each player.

Friday night — North Dakota is focusing on in setting the tone for the series and making sure its home ice advantage is kept an advantage.

North Dakota holds a 50-21 record in postseason play under Hakstol, with 19 more wins than any other school since he was hired.

In only its second year in the NCHC, defeating the Tigers would move UND one step closer to clinching its first Frozen Faceoff tournament championship to accompany its 11 playoff titles in the WCHA.

The team won’t ignore that success, but now it’s glancing at something else.

“It was a good feeling to complete Step 1, but this is crunch time now,” junior forward Bryn Chyzyk said. “This is what we work all season for — playoffs and the tournaments — so we’re happy with completing Step 1, but we’ve got a few more steps that are a little more important coming up, so I think we’re focused on them now.”

And with the depth of a team that has persevered through ups and downs, its challenges have only given it more momentum.

“I think everyone’s ready to go,” Pattyn said. “Everyone’s willing and ready to jump in if they have to. And I think that’s the biggest part of our team — we’re so deep. We’ve got guys that are sitting out that can come in and be a big part of our team right away.”

Even as the No. 1 seed, North Dakota knows the parity of the league sets no guarantees in defeating teams.

Colorado College has yet to win against UND this season in four games, but North Dakota won’t overlook that.

This weekend, seniors on North Dakota’s roster will step on the ice at Ralph Engelstad Arena for one last time, but they’re hoping for another month of hockey ahead of them.

The playoff season is here, and the team is well on its way, traveling on the road they hope will lead them to Boston with a steady focus.

“Games keep getting more intense and faster, and you’ve just got to be ready to come to the rink more prepared than ever,” sophomore defenseman Paul LaDue said.